Buddhism continues to flower in Mongolia

The practice, suppressed for decades by the Communist Party, is being reclaimed by Mongolians as an integral part of their national identity.

Shand Khiid, Mongolia -- In the crimson-painted interior of a monastery in central Mongolia, boys as young as 6 face one another cross-legged on benches and chant Tibetan Buddhist prayers that they barely understand. 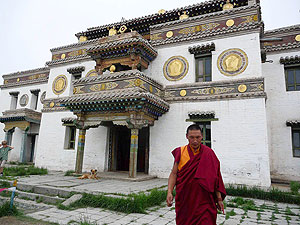 Some fidget and get up every now and then to ladle bowls of fermented horse milk from a large metal vat. Their teachers occasionally call out directions.

The boys are at a three-month religious camp at the monastery, Shand Khiid. The oldest monk in residence is 97. A visiting sage from Tibet relaxes in a back room, watching sports on television.

According to a monk who showed a group of visitors around one recent day, the monastery guarded Genghis Khan's black flag of conquest until it was moved to Mongolia's National Museum of History in 1994. Four years earlier, the collapse of Soviet-bloc communism had led to the ouster of Mongolia's Communist Party.

Today, Buddhism in Mongolia continues to emerge from a decades-long hiatus.

"During the Communist period, you had a devastation of Buddhism in terms of the material culture and the loss of knowledge," said Vesna Wallace, a professor of religious studies at UC Santa Barbara. "Now more people are coming to temples and visiting monasteries. There is also a new interest in meditation among the general public."

Wallace, an expert on Mongolian Buddhism, has spent the last 10 summers there and has seen Buddhist youth groups grow from three or four people to major gatherings. She says Mongolians have reclaimed Buddhism as an integral part of their national identity.

Couples who grew up with no religion are now choosing to be married in temples and by monks. The Gandan monastery in the capital, Ulan Bator, is the largest in the country and busier than it's been in decades.

Mourners across Mongolia are again consulting monks before deciding whether a loved one should be buried, cremated or left outside to the elements for what's known as a "sky burial."

And prayer piles, enormous cairns known as ovoos, have sprung up around the countryside. Truck drivers leave punctured tires to pray for safe travels and shepherds leave livestock skulls in hopes of a healthy herd. Blue scarves flutter in the wind, symbols of the blue sky that Mongols worshiped in the pre-Buddhist period.

Mongolian Buddhism is predominantly the Yellow Hat sect of Buddhism practiced in Tibet and China. But Wallace says it has evolved into its own version, having incorporated the pre-Buddhist religion of tangarism as well as shamanistic influences.

"Tibetans prefer white scarves, Mongolians prefer blue," she said. "Even certain deities that are preferred by Mongolian Buddhism are the blue ones that represent eternity, spaciousness and the comprehensiveness of the sky."

Mongolia, with half of its 2.8 million people living in Ulan Bator, is one of the most sparsely populated countries in the world, with vast tracts of open grassland. In 1578, Genghis Khan's descendent Altan Khan made Buddhism the official religion, installing the Tibetan Sonam Gyatso as Dalai Lama and conscripting males to monasteries instead of into the army.

The country's oldest monastery, Erdene Zuu, was built in 1585 in the ancient capital of Karakorum, the ruins of which can still be seen near the town of Kharkhorin. At its height, Erdene Zuu was home to 67 temples and 1,500 monks. Today, 28 monks live on the site and 18 structures still stand. The monks use one temple for study and chanting, while the other buildings are open to the public.

In 1937, the Soviet-allied Mongolian Communist Party banned Buddhism and persecuted its 100,000-strong priestly class. The government executed nearly 20,000 lamas, or Buddhist teachers, and at least 10,000 educated monks. Another 10,000 were sent to Siberian labor camps. Most of the country's 2,000 monasteries were destroyed.

During decades of official atheism, some Buddhists continued to practice their faith privately in their homes. The devout would pretend to play cards but instead discuss Buddhism and pray. Children would act as guards to make sure no officials were coming.

"My mother is a very strong Buddhist. Even in the Communist time, when she had a problem and a child was sick, she would visit a monk's home to ask advice. It was so secret," said Enkhtuya, 40, an elementary school teacher in Ulan Bator. Like many Mongolians, she uses only one name.

Munkhbaatar Batchuluun was 11 when democracy arrived in 1990. Elders in his village southwest of Ulan Bator restored their small yurt-shaped monastery and revived chanting ceremonies.

"It was very new. People were brainwashed against religion. I was very curious and visited," recalled Munkhbaatar, now secretary of foreign relations at the Gandan monastery. "I was so impressed I went home and asked my parents if I could join. At first they weren't happy; people would laugh at monks and tease them as state enemies. But eventually my father agreed."

Much has changed. Most Mongolians now identify themselves as Buddhist. And the Dalai Lama has made seven visits to Mongolia, five of them since 1990.

Still, it has been a struggle to re-educate the public, especially since few sacred texts are translated from Tibetan to Mongolian, and there still aren't enough teachers.

In recent years, a new competitor has arisen: Christianity. Many Christian missionaries arrived in Mongolia after the fall of communism, just as they did in Eastern Europe. The largest groups now converting Mongolians are American Mormons and South Korean fundamentalists.

Still, as grandparents show their grandchildren around monasteries explaining the prayer wheels, altars and parchment books, it is clear that Buddhism runs deep in Mongolia.

"The Communists cleaned it from our body and from our speech, but they couldn't remove it from our souls," Munkhbaatar said. "The people may not have a lot of Buddhist education and understanding, but they have Buddhist faith."