Dharamshala, India -- The Taiwanese-sponsored social and musical charity, White Tara, yesterday (June 9) held a concert at the Tibetan Institute for Performing Arts (TIPA) in McLeod Ganj. About 300 people, had bought a ticket for the venue which lasted a good three hours. Mainly young Tibetans were among the audience but a handful of foreigners also made it as well as a few children's families and a small crowd of monks. 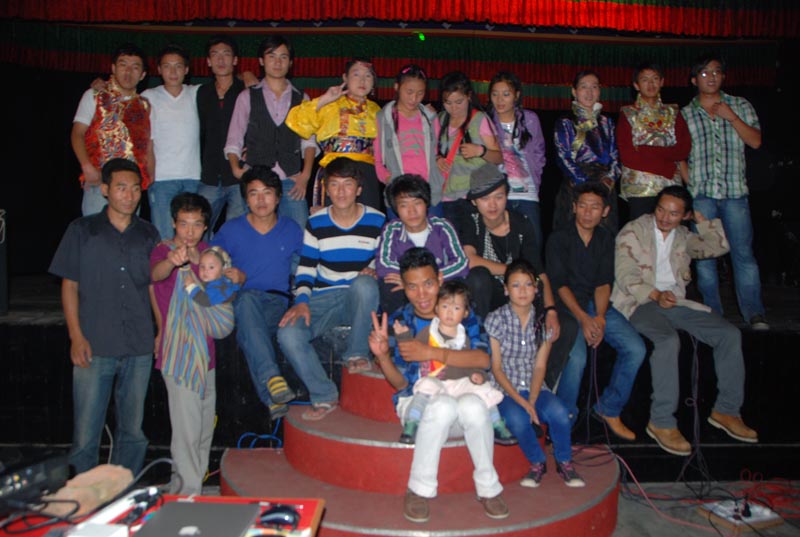 Aimed at TCV-students who haven't got relatives to visit during school-holidays, White Tara provides them with music and singing lessons and offers them a chance to try their performing skills on a live audience. So far, the charity has held more than 30 concerts and has had around 200 students under their wings in the last couple of years.

The concert consisted primarily of songs with Tibetan lyrics and a modern disco-beat mixed in with bits of rap-verses. But before the nervous students made their entrée on the stage, footage was shown on a big screen, showing Tibetans, young and old, dancing and singing to Tibetan music in an outdoors setting. The joy of the dancers in the film easily spread to the audience in the TIPA concert hall.

Opening the gig was a 4-piece boy band, crooning their way through a pop tune and wearing traditional Tibetan clothes. After that, one of White Tara's teachers informally, but proudly, presented a whole range of performances, many starting with a video-clip of the students, taken before they received training, where they talked about their wish to play music and the shyness of actually doing it.

The audience let no artist in doubt of his or her performance, as they clapped, cheered and laughed accordingly. A group of 5 girls all with beaded hair - they had spent all afternoon choosing costumes and jewellery - made a dance choreography that could have been taken straight out of MTV, but the biggest applause came in the form of absolute silence and focus when a young man sang a song about freedom accompanied by a video-collage of images from Tibet.

About three years ago, a Taiwanese monk, Waitsai, was traveling around India with a female companion, Tsai Yung Ching. Upon reaching Dharamshala, Waitsai requested a visit to the Upper TCV school and a local guide was happy to take him there. By chance, the visit took place during Losar, the Tibetan New Year, and when Waitsai met the many students who had no where else to go during the holiday, he decided to instigate a project to alleviate the loneliness of being away from home and family.

The guide, who goes under the name of Bubu, now works as a music teacher and organizer for White Tara and by a romantic twist of fate, he is now married to the monk's traveling companion Tsai Yung Ching and the pair has a one-year old child. The students' age lies in the range of 12-20 years and two other teachers also work for the charity.

One of them, Sonam Tsering, said that whenever White Tara holds a public event with income from ticket sales, the profit is always given to the students, who in turn form small groups and decide where or who they wish to support in the community. Recipients are mostly poor families or community-projects. Not having done the exact counting, Sonam Tsering estimates that the evenings profit only came to a few thousand Rupees, but he still regards the concert as a great success.

While the concert unfolded indoors at the TIPA, this year's heaviest rainfall came gushing down outside. But just as the event was coming to an end, the rain stopped and the impressed crowd could safely walk home, having witnessed the liveliness and popularity of Tibetan contemporary music.