Taipei, Taiwan -- During the launch of his autobiography, Buddhist master Arjia Rinpoche spoke about his time in China’s labor camps as well as why he went into exile. 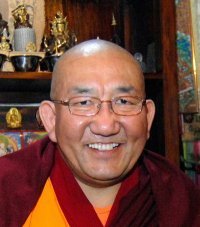 Citing his own experiences at a press conference to launch his autobiography in Taipei yesterday, exiled Tibetan Buddhist master Arjia Rinpoche accused the Chinese government of trying to control and manipulate religion.

Born in 1950 and confirmed as the reincarnation of the seventh Arjia Rinpoche in 1952, Arjia Rinpoche — who is an ethnic Mongolian — was sent to Kumbum Monastery in Qinghai Province, thinking that he would lead a life as a simple monk.

However, Chinese occupation of Tibet and the Chinese government’s attempt to wipe out religion changed the course of his life.

“One day [in 1958], all monks at Kumbum Monastery were called to attend a meeting. At the meeting venue, we found ourselves surrounded by Chinese officials, police and military personnel carrying guns,” Arjia Rinpoche said. “The officials announced that they wanted to break feudalistic superstitions, and all of a sudden some militiamen came out and arrested more than 500 monks.”

Although Arjia Rinpoche escaped arrest, he was forced to attend Chinese school and work in labor camps for the following 16 years.

As a result of the Chinese government’s “religious reform” and the Cultural Revolution — which lasted from 1966 to 1977 — the number of monks at Kumbum Monastery decreased from more than 4,000 to just 50, with many monasteries destroyed and monks sent to labor camps.

In his family alone, as many as 29 people were sent to labor camps, Arjia Rinpoche said.

Despite the Chinese government’s attempt to destroy Buddhist culture, Tibetans kept the culture alive even in the labor camps.

“Older monks always told us to continue our studies of Buddhism, we did not have books — because they were banned — but the older monks had memorized all the Buddha’s teachings, and they secretly passed the knowledge to us,” Arjia Rinpoche said.

Following the political rise of Chinese Communist Party member Deng Xiaoping (鄧小平) after the Cultural Revolution, the Chinese government’s policy on religion loosened a little bit, allowing Arjia Rinpoche and other monks to return to monasteries.

However, the selection of the 11th Panchen Lama made him decide to go into exile.

Arjia Rinpoche — along with many other respected Tibetan Buddhist masters — was forced to attend a ceremony to draw the name of the 11th Panchen Lama from a golden urn held by the Chinese government in 1990.

He said that he did not want to attend the political-religious show, especially when drawing lots from a golden urn was not originally a Tibetan tradition, but a measure imposed by the Chinese Emperor Qianlong.

Although the name-drawing event proceeded smoothly, Arjia Rinpoche was shocked when he was told by the Chinese Bureau of Religious Affairs director Ye Xiaowen (葉小文) that the ivory lot with the name of the child that the Chinese government wanted to become the 11th Panchen Lama was made longer so that the lot drawer would know which to pick.

“I was shocked when I heard this, because it was disrespectful to our religion and to my beliefs. They also wanted me to be the teacher of the new Panchen Lama,” Arjia Rinpoche said. “I simply couldn’t do it, so I decided to go into exile in 1998.”

Also attending the press conference, Democratic Progressive Party Legislator Hsiao Bi-khim (蕭美琴) — who is a long-term supporter of the Tibetan cause — said Taiwanese should learn from the lesson, while urging Taiwanese to render their support for the Tibetans and the Chinese in their struggle for freedom.
TOP