The Lay Buddhist building in New Taipei City’s Tucheng District was originally home to Chinese settlers, who arrived 200 years ago, the historian said

Taipei, Taiwan -- In tears, Lee Jung-tai, a historian and the daughter-in-law of late Buddhist clergyman Lee Ying-pin, yesterday recounted the history of the Lay Buddhist monastery Puantang, while calling on the government to save the building from a forced demolition scheduled for today. 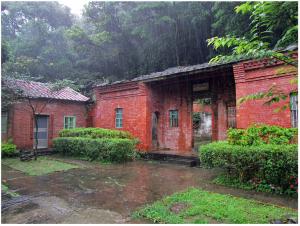 Following a 15-minute drive along a narrow road into the mountains on the outskirts of Tucheng District, New Taipei City, a sign that reads “Puantang” finally appeared on the left side of the road, with stairs and a traditional Chinese arch behind it.

The arch was blocked with a line of tape, and a police car was parked in front of it.

It takes another 15 minutes to walk to the entrance of the Puantang complex. However, the gate was closed yesterday.

“We have always welcomed visitors, but we are keeping the gate closed because we are afraid that someone may come to vandalize the building,” Lee Jung-tai said.

Puantang is scheduled to be torn down today, as the Cih-you Temple in Sinjhuang District, New Taipei City, registered ownership of 300 hectares of land in the area in the 1970s, saying the land was presented to the temple during the Qing Dynasty by two Chinese settlers.

However, Puantang disputed the claim, citing historic documents and saying that the two settlers only donated 10 hectares of land to the temple.

However, the New Taipei District Court ruled in favor of the temple, giving it the right to tear down the buildings on the land.

The Puantang complex is made up of a traditional brick house and a two-story modern concrete house, and is surrounded by trees, bushes and flowers.

“The brick house was home to the first Han Chinese settlers in the area, who arrived more than 200 hundred years ago. Originally a mud brick house, the building was rebuilt with stone bricks more than 100 years ago,” Lee Jung-tai said. “The settlers brought statues of immortals, including the Taoist Goddess Matsu and the Buddhist Bodhisattva Avalokistevara, and placed them in this house. Later, the house was turned into a place of religious worship, and the lobby became the prayer hall, while the other rooms were turned into dormitories for clergy and followers.”

Lee Jung-tai said the roof of the brick house was hit and damaged by a falling rock about 10 years ago, and the statues were moved to the two-story building.

“However, the couplets carved in wood and the ones hanging on either side of the door are original,” she said.

Lay Buddhism was once the most popular religion among Han settlers and their descendants in Taiwan throughout the Qing Dynasty and Japanese colonial periods.

However, with the promotion of Japanese Buddhism during the Japanese colonial period and the arrival of Chinese Buddhist masters after World War II, many lay Buddhists converted to orthodox Buddhism.

Besides the building and ancient statues, Puantang also holds many centuries-old religious instruments that are seldom seen nowadays.

“This is an instrument that clergy used to convey the messages of immortals,” Lee Jung-tai said, holding a V-shaped horizontal wooden instrument with a round vertical stick attached to it.

“A clergyman would put sand on the table, and ‘write down’ what he perceived from immortals with the instrument in some sacred script, and another clergyman would stand next to him to ‘interpret’ the writing,” Lee Jung-tai said.

Since Lee Ying-pin was a famous artist and sculptor, the monastery also kept many his masterpieces in drawing and sculptures.

“Puantang is an important site to trace the development of the Hsientien School [???] of lay Buddhism, and the only remaining lay Buddhist monastery in northern Taiwan,” Lee Jung-tai said. “Look at the historical buildings, the centuries-old statues and religious instrument, the sculptures and drawings by Lee Ying-pin, and the beautiful and peaceful atmosphere. How hardhearted would you need to be to flatten this place?”

“I’m determined to defend this place. I’m willing to sacrifice my life to protect it,” she said.