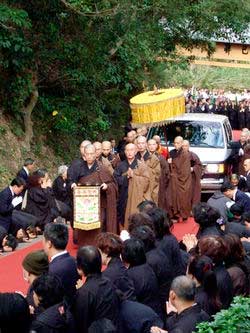 Sheng-yen died of kidney failure Feb. 3 at the age of 80. He had served as abbott of the Nung Chan Monastery before establishing a Buddhist sanctuary in Dharma Drum Mountain in Chinshan in suburban Taipei in 1989.

Monks and nuns in black and brown robes accompanied the hearse and followers knelt by the side of the road in the rain as he left the headquarters of his Dharma Drum Foundation in the hills of Jinshan in Taipei County.

At the Chuanhua Hall in Shihtoushan, the site for his cremation, cable stations estimated the audience as between 10,000 and 20,000 people.

His body was cremated Sunday after monks sounded a gigantic bell inscribed with Buddhist scriptures at the Dharma Drum Mountain. Eight monks then carried Sheng-yen's body — covered by golden sheets in a hearse_ down a winding mountain road lined with followers, solemnly clapping their hands.

Sheng-yen was venerated for his teachings of mercy, simple life and fulfillment of one's duties. "Face up with the difficult situation, overcome it and then put it aside to have a peace of mind," he had said.

In keeping with such philosophy, the Dharma Drum Mountain sanctuary has banned practices deemed superstitious but commonly adopted by other Taiwanese temples, such as the burning of incense sticks and paper money dedicated to ghosts.

Since his death, followers in black suits or ceremonial gowns have streamed in and out of the sanctuary with offerings of flowers in mass prayers, and many others were doing simple prayers at home.

The master's ashes will be scattered in the woods next to the sanctuary on Fdeb 15, following his wish to replace elaborate burials, followers said.

Master Sheng Yen was born in China's Jiangsu Province, and first became a monk at the age of 13. He was later drafted into the armies of Chinese Nationalist leader Chiang Kai-shek, and followed him to Taiwan as defeat by the Communists loomed.

He developed a malignant tumor a couple of years ago, leading to the removal of his left kidney. In 2006, he lost the function of his right kidney, necessitating dialysis three times a week. He recently turned down an offer from hospital to undergo a kidney transplant, saying it wasn't worth wasting effort on an old man like him, reports said.