Taipei, Taiwan -- After seven days of natural disasters, the Tibet Office "Tibet Religious Foundation of His Holiness the Dalai Lama" in Taipei have organized a special prayer ceremony for the victims of Typhoon, those who lost their lives and those who still missing. 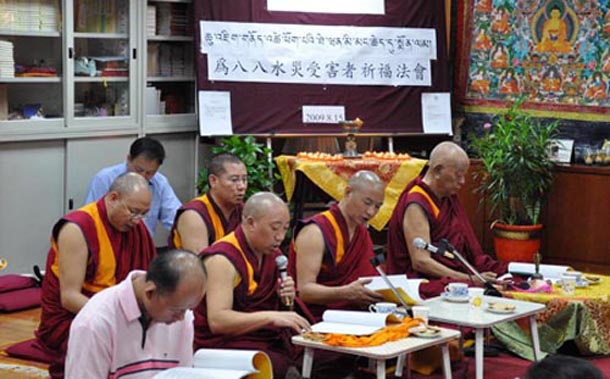 The ceremony was led by Tibetan monks including former abbot from Sera Jay monastery. Many Taiwanese Buddhist followers and all staff members of The Tibet Religious Foundation also attended the ceremony.

"The Tibet Religious Foundation of His Holiness the Dalai Lama based in Taipei has called Tibetans and Taiwanese Buddhist followers in Taiwan to hold a prayer ceremony for the Taiwanese who lost their lives in tragedy of the recent natural disaster," Keary Huan, Taipei correspondent for The Tibet Post (TPI) said.

"We are deeply saddened to learn of the very tragic situation from the media, from our Taiwanese friends and even their relatives. The reports have revealed heart breaking stories of tragedy, of fear, and pain in their hearts. Taiwanese people not only suffered from the merciless wind and rain, but they have also  taken a great hit, with high loss of livestock, and the loss of life of their loved ones in the disaster," Mr. Sodor, the secretary of the Tibet Office in Taipei told TPI.

"The typhoon had mainly hit southern Taiwan, causing many lives there buried under mud and rocks. Particularly Liouguei Township, and Shiao Lin village Kaohsiung County were reported to be covered with what rescuers say, may be, five stories of mud. The news has been officially confirmed that 398 people were buried alive," said Keary.

The residents said there were more people than usual in the village when the storm hit last weekend because Saturday was Taiwanese Father's day. So many people on that day returned to their home villages to celebrate the occasion with families.

People in Shiao Lin are also scene at the disaster yesterday, Chinese and Siraya (Taiwan native) have performed traditional rituals to commemorate the tragic deaths of their loved ones. They presented inscence, betel nuts and cigarettes, hoping their loved ones can rest in peace at an early date.

"The questions after the natural disaster are; where should the villagers go, what is their next steps and how will they live?" No one knows the answer. Shiao Lin is now completely buried by muds and rocks, The 137 people have took an initiative to contact with the central government, finally more than 200 villagers from Shiao Lin have been moved to a safe place and total of 571 people from Shiao Lin are now safe."

Since last week, over 116 people died under the disasters, 59 missing, 45 injured, thousands stranded, and 398 buried.