In Taipei, recycling is not just socially responsible, it is a religious practice for the elderly volunteers at the charity Tzu Chi

Taipei, Taiwan -- I had a vision of the future last week. It wasn't half as sexy, hi-tech or awe-inspiring as I might once have hoped, but there was a certain gritty positivism about the experience that made it feel more real than any science-fiction fantasy. 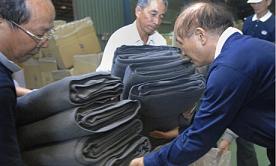 << Members of the Buddhist group Tzu Chi Foundation prepare blankets in Taipei. They are to be airlifted to China after the earthquake in Sichuan. Photograph: Patrick Lin/AFP/Getty Images

The setting was a Buddhist recycling centre on the outskirts of Taipei, where elderly volunteers were purifying their minds (or in some cases, just passing the time of day) by unscrewing tops and peeling off labels from a mountain of discarded plastic bottles. Sorted by colour so the plastic could be broken down, granulated and reused, the bottles were destined for reincarnation as soft blue polyester blankets.

In a separate workroom, another rank of volunteers on sewing machines hemmed the material, ironed on the logo of the Buddhist charity Tzu Chi, and folded them ready for free distribution to disaster victims and the homeless.

And that's it. Not a very euphoric revelation, I grant you. But it struck me that Tzu Chi – an organisation I had never heard of until last week – were riding three of the biggest waves of the 21st century.

The first was the ageing of wealthy societies. Taiwan is in the world's grey frontline, along with Japan, Hong Kong, Macau and several countries in Europe that are trying to find new ways to keep their elderly populations active, occupied and socially useful. The old people sorting through the trash near Taipei were from middle-class families. They said they did so for the exercise, for the company and because it was more constructive than sitting at home alone watching TV.

The second was the growing importance of recycling as the world's nonrenewable resources run down. Taipei city has one of the highest recycling rates on the planet. The rules are so strict that some city residents plan their social lives around rubbish truck schedules. Even McDonald's has separate bins. Chiau Wen-Yan, deputy minister of environmental protection, told me the recycling policy was now so successful it was creating a welcome problem of incinerators not having enough to burn. On this crowded island, the practice is not just socially responsible, it's becoming semi-religious. Tzu Chi – with 50,000, mostly retired, recycling volunteers – is one of three Buddhist groups that picks up members along with the rubbish.

The third was the growing need to prepare for disaster. If the climate specialists are right, storms and floods will become more frequent and intense. This summer, Tzu Chi handed out 60,000 recycled plastic blankets to the survivors of Typhoon Morakot, the biggest downpour in Taiwan's history, which killed more than 500 people.

People expected more disasters on this scale in the future, the vice minister of economic affairs, Huang Jung-Chiou, told me. It turned out he too was a Tzu Chi member, who was vegetarian on Mondays and volunteered for rubbish recycling even after taking office.

"It was an important experience," he said. "Peeling the labels off bottles was extremely boring, but it made me think 'Look at all that garbage. Who produced it?'"

I don't know enough about Tzu Chi to endorse them, but their bottles-to-blankets activity seems a grittier form of the recycling done by charity shops in the UK. It is not exactly how I hope to spend my retirement, but facing up to absurd amounts of waste is probably what we will all have to do a lot more of in the future.