Balmain, Australia -- CHODEN Rinpoche never left his room for 19 years. Rather than escaping his country during the Chinese invasion, Rinpoche, one of the highest lamas of the Tibetan Buddhist tradition, decided to not leave his small, dark room in Lhasa until 1985. 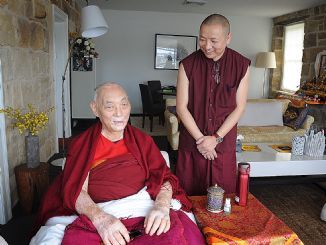 Through Rinpoche’s attendant Geshe Gyalten, he said there were two main reasons: “The benefit of doing a 19-year retreat was to be able to enhance the quality of the mind in ways of peace, focus and clarity, even though the outside world during that time was very crazy during the cultural revolution.”

Rinpoche said all Tibetans were forced to denounce Buddhism as the the Chinese saw it as poison, another reason to stay indoors. “The second reason was to learn all about the Buddhism philosophy, to interpret it and put it into practice.”

He was closely monitored by the Chinese and if any religious objects were found they would take them away, but Rinpoche did all the retreats using just his mind.

Rinpoche will bring his extraordinary knowledge, peace and spiritual teachings to Balmain. “All this stress, fear and worry can be defeated” he said. “In order to overcome it you must identify it ... the stress and worry is just a feeling and part of the mind.

“If you have a content mind, there’s no more base for fear or worry,” he said.

Rinpoche will teach calm abiding meditation and the six yogas of Naropa.

There will also be an introduction to Tantra with Geshe Gyalten.

The free teaching is on now until April 1 at Balmain Town Hall. For bookings and more information visit https://www.buddhastatuesnow.com