For Belgrave Buddhist monks, it's the rite way to celebrate

Maroondah, Australia -- It's not every day you get offered the chance to celebrate the Dalai Lama's birthday - and certainly not an invitation you'd expect in the outer east of Melbourne. 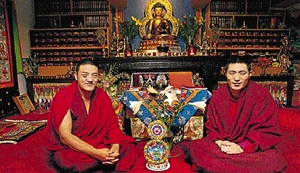 << Celebration: The Tibetan Buddhist Rime Institute in Belgrave is celebrating the Dalai Lama's birthday this weekend. Kimga and Tamkey are monks at the institute. Picture: Wayne Hawkins.

But this weekend you can do exactly that when the Tibetan Buddhist Rime Institute in Belgrave opens its doors to the general public for the Dalai Lama's 77th birthday.

Public officer for the institute Julie O'Donnell said the celebrations would provide an opportunity for people to witness monks chanting and using traditional instruments.

"It is just a nice thing for people to see because you don't often get to see Tibetan rituals."

Ms O'Donnell said people were embracing more of Buddhism and meditation. "I think a lot of people are looking to find a bit more meaning in their lives. They are embracing alternative ways to do this and Buddhism is one of those ways."

The institute has been operating in Belgrave for more than four years and has about 50 members.

Ms O'Donnell said no prior knowledge of the religion was required to enjoy the weekend. "It is for the community to come and celebrate with us. You don't need to do anything - you can just come and watch if you like."

It begins at 7.30pm on Friday with a traditional offering for the Dalai Lama.

On Saturday, events start at 11am with a lunch offering to monks of different Buddhist traditions and a longlife puja for the Dalai Lama. A puja is a ceremony involving prayers, chants and rituals to generate blessings.

In the afternoon, Tibetan films and a documentary about the Dalai Lama will be screened and handicraft and book stalls will be open. There is no need to book and entry is free, but donations for the temple are welcome.

The Rime Institute is at 1584 Burwood Highway, Belgrave. Details: rimebudhism.com.