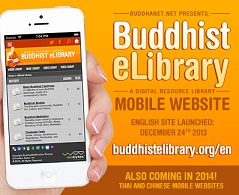 Merry Christmas to us. (fyi, Access to Insight can also be downloaded in full here for android and on itunes for iphones, or to your computer for offline browsing.)

The eLibrary is currently fairly sparse in its offerings and available online in 5 languages: English, Chinese, Thai, Portuguese, and Spanish, but further languages and materials are planned.

Buddhanet and the eLibrary seek to “support the globalisation of Buddhist education and the systematic development of Dharma based pedagogy by establishing partnerships with Buddhist institutions worldwide. The eLibrary follows the principle of ‘One Dharma’, that is, promoting all Buddhist traditions and the diversity of cultures and languages they represent.”