Unanderra, Australia -- It has been 15 years in the making but the wait will be over this Sunday when Australia's first government-accredited Buddhist tertiary institution is officially opened before many guests. 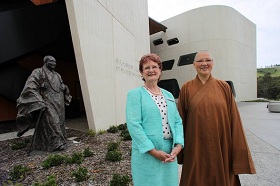 << Nan Tien Institute director Venerable Miao You (right) and head of health and social wellbeing Dr Leigh Wilson outside the new NTI campus, which will officially open on March 1. The opening will include cultural performances and activities, a food fair and official tours. Picture: GREG TOTMAN

The Nan Tien Institute (NTI) will celebrate the opening of its $40 million landmark building in Unanderra with a community and cultural celebration, coinciding with Chinese New Year.

The March 1 event, starting at 9.30am, is expected to attract thousands of guests and visitors from around the Illawarra, interstate and worldwide.

But most of the attention will be on special guest, Venerable Master Hsing Yun. The founder of the Fo Guang Shan Buddhist Order, the Nan Tien Temple and NTI has 15 million devotees around the world and his presence at the event is expected to attract thousands.

"We have also organised a host of other activities, including cultural performances and activities, a food fair and official tours."

The centre's opening means the first use of the NTI's state-of-the-art facility, custom-designed to serve as an education campus, art gallery and community cultural hub.
See your ad here

It comes after 15 years of planning, design and construction work, which included a significant multimillion-dollar clean-up – financed by  the temple – of the previous local landfill garbage tip on the site.

The 15-hectare parcel of land opposite the temple was donated by Wollongong City Council in 2001 for the creation of this ‘‘community-enhancing educational facility’’.

Award-winning international architects Woods Bagot used the Buddhist symbol of the lotus flower as the starting point for the building’s design.

Spanning 6000 square metres, the design includes four distinct ‘‘pods’’ which Woods Bagot describe as ‘‘linked by active bridges, allowing for movement through the building to be a journey comprised of moments, destinations and thresholds’’.

NTI acting president and foundation dean Professor John Loxton said the campus  was ‘‘a beautiful lotus building rising out of the wasteland’’.

‘‘In keeping with the humanistic Buddhist teachings of Fo Guang Shan, the architecture avoids hierarchy, is modern, values the spaces in between, as well as providing a neutral environment devoid of excess and materialism,’’ Woods Bagot senior associate John Prentice said.

Project manager John Sullivan said the entire building was made primarily of precast concrete, and featured distinctive curved concrete walls made up of 169 precast concrete panels weighing up to 14 tonnes.

It’s the first stage of a wider education project planned by the temple and the Fo Guang Shan Buddhist order.

The new building caters for 300 students. NTI’s vision is to become the Illawarra’s second university with infrastructure catering for 3000 students.

To achieve this the next step will be a $20 million bridge  over the M1 Princes Motorway, linking the temple with the institute.