Meditation and the art of becoming a better boss

Chief executives are finding their 'Buddha nature' in the practice and disciplines of Tibetan meditation. Julie Macken reports.

Sydney, Australia -- When Gordon Cairns began as CEO of Lion Nathan, he says he was "a horrible boss – driven by power, task-oriented and only concerned with getting the job done, whatever the cost". 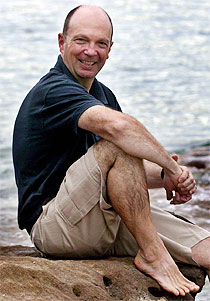 << NEW MAN: Gordon Cairns learned through Buddhist meditation that there was a better way to behave than being driven by ambition - and it changed his life.
Fairfax

"That was bad for me, bad for the company – because really good people didn't want to work for me – and bad for my family. I'm glad to say that has changed."

Mr Cairns, former chief executive of Lion Nathan, has been on AFR BOSS magazine's True Leaders list two years in a row. He changed his behaviour in 1999.

Between November 2000 and November 2004, under Mr Cairns' leadership, Lion Nathan shares rose by 109 per cent and the company delivered total returns of 145 per cent, outperforming the broader market by 110 per cent.

Now a non-executive director of Westpac, the Seven Network and Opera Australia, Mr Cairns is the kind of bloke people refer to as "affable", "likeable" and "easygoing" – a far cry from the bad, old days of being a driven, aggressive and intolerant business executive.

But the story of how he changed is more than just an individual narrative of fall and redemption. Mr Cairns did not take up the usual set of therapies for the troubled soul. Instead, he found himself a teacher and learned to meditate.

Last week, Mr Cairns – along with 28 Australian business leaders – went to their annual Buddhist retreat, a two-day event led by Tibetan master Sogyal Rinpoche. The author of The Tibetan Book of Living and Dying who teaches them the ancient practice and disciplines of Buddhist meditation.

It is not the usual gathering of hippies. Roughly three-quarters of the group are CEOs of Australia's top 100 companies and entrepreneurs, and about a quarter are leaders from Australia's top non-government organisations, says David White, director of Port Jackson Partners and a former director of McKinsey & Co.

Mr White, the facilitator of the group and a founding member, says: "We began four years ago with about a dozen people and it has grown through word of mouth."

Though attendance is invitation-only, Rinpoche has also taken a large number of public workshops and meetings. According to Sue Pieters-Hawke, his principal contact point in Australia, he began teaching the leaders' group "because he was asked and because it makes sense to teach people in leadership positions because they affect so many people in their daily lives and decisions".

The benefits of meditation have been known in the West for more than three decades.

Scientific data continues to grow and shows the beneficial effect it has on the immune system, relieving anxiety and creating a greater capacity within the wiring of the brain for happiness.

During the past 20 years, various kinds of meditation have come in and out of fashion within the business community. Most have been centred on the principal that meditation is useful for advancing a person's individual life and making them more effective in achieving their goals.

What separates Tibetan Buddhist meditation from many other practices is its refusal to engage in that kind of narcissism. As Mr White explains: "Rinpoche makes it very clear this is not about self-improvement.

"For instance, commando units in the US Army practise some form of meditation to become better at killing.

"This is not the Buddhist way. Meditation is not truly effective unless it is linked to motivation."

And the bad news for many is that "this meditation's sole purpose is to clear the mind so that we become of service to others; it is not an end in itself".

Having read the classic baby-boomer book Zen and the Art of Motorcycle Maintenance 30 years ago, Mr Cairns became interested in the meditation form for four reasons. "I was attracted to it because of its moral ethics, like `commit not a single unwholesome act'," he says.

"The Buddhists believe every one has a Buddha nature. And finally because, having reached the age of 55, I understand that nothing is permanent and it is important to reflect on the changes brought by death."

Buddhists also believe your worst enemy is the best teacher and given that the tiny country of Tibet was invaded and occupied by the Chinese Red Army, Tibetans have been richly blessed.

And there are plenty of enemies around if you listen to Steve Killelea, former chief executive of IT company Integrated Research.

"Forget suicide bombers – we're close to the point where nanotechnology will make it possible to use a couple of centimetres of plastic explosives to wipe out an entire city," he says. "That's why we have to find ways to build peace because war is too dangerous an option."

As a man who has made millions out of understanding how computer networks work, Mr Killelea has a deep appreciation of how Buddhist meditation helps heal traumatised minds and build a capacity for clarity and happiness. "There's plenty of good scientific evidence that shows how meditation works with the plasticity of the mind and actually builds and energises parts of the brain to increase happiness.

"In a business environment, you become calmer, are able to take in much more information and make decisions based on clarity, not ego."

Words like "compassion" and "happiness" don't necessarily sit well with people keen to portray themselves as tough, can-do business leaders.

But Mr Cairns, Mr Killelea and Mr White all point to different people as examples of the strength inherent in compassion. They include Nelson Mandela, Mahatma Gandhi and the Tibetan masters themselves.

"Oftentimes, the compassionate answer or decision will be much harder than the ruthless or expedient answer," Mr Killelea says.

On the question of leadership, Mr White has no doubt which approach is better: "I would sooner follow someone capable of empathy, of listening and who had the company's overall interest at heart, than someone out for their own gain."

Mr Cairns says he spends "20 per cent of my time sailing and holidaying, 30 per cent doing work with Westpac, Seven and Opera Australia, and 50 per cent mentoring people and caring for the dying. It is that side of my life that gives me the most joy and meaning".