Perth, Australia -- Hundreds of well wishers turned out to greet the Dalai Lama when he arrived in Perth today for the first leg of his 2007 speaking tour. 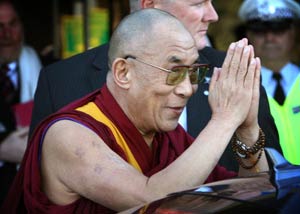 << The Dalai Lama arrives in Australia, greeted by a crowd of about 500 people at perth Airport. Picture: Trevor Collens.

The spiritual leader of Tibet met members of Perth’s Buddhist community, many who brought katak scarfs, which he blessed.

The Dalai Lama also greeted 12 week old Kyle Edgar, whose parents Catherine and Craig had waited at the airport to meet him.

It is the first time in 15 years the Dalai Lama has visited Western Australia.

Up to 35,000 West Australians are expected to hear him speak during three separate events tomorrow, before he flies out on Thursday to Melbourne.

He is set to meet Opposition Leader Kevin Rudd on June 12, after Mr Rudd initially expressed hesitation at a meeting for fear of upsetting China, which rejects the Dalai Lama’s authority and Tibet’s push for autonomy.

At last report, Prime Minister John Howard was still struggling to find time in his diary to arrange a similar meeting. He has been accused of kowtowing to China’s communist government in refusing to meet the monk.

At Perth airport today, the Dalai Lama told the crowd he was very happy to once more be in Australia, which he described as a “strange continent”.

He said wherever he went he worked for the promotion of human values and religious harmony.