Upwey, Victoria (Australia) -- ALMOST two decades after the foundation stone was laid for a new meditation hall at the Buddhist Discussion Centre in Upwey, the building now stands as a monument to the vision of its founder - the late John Hughes - and the patience and ingenuity of the community he nurtured. 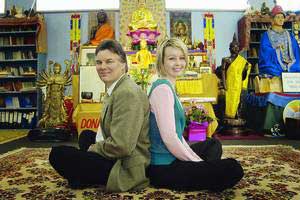 Last Sunday, the John D. Hughes Dhamma Cetiya hall and library was officially opened in front of the gathered members of the hills’ community and representatives of the Victorian Buddhist community.

Astonishingly, the hall was designed and built entirely by the members of the Buddhist Discussion Centre – none of which had any formal experience in architecture or construction.

While construction only began in January last year, planning for the hall began shortly after the centre was founded in 1978 – when John Hughes’ lifelong quest to make the Buddha’s teachings accessible to ordinary Australians prompted him to turn his Upwey residence into a temple.

As the centre’s membership grew, it became clear to Mr Hughes that his humble verandah would not suffice as a place to meditate and peruse his vast collection of Buddhist literature.

And while the symbolic foundation stone was laid in October 1989, it wasn’t until 2002 that formal plans were drawn up by Mr Hughes – one year before he passed away.

It was only when a planning permit was granted by the Shire of Yarra Ranges in December 2005 that the vision began to take shape.

As the centre’s co-director and vice-president Frank Carter explained last week, the hall itself was constructed by a diligent crew of around 15 members.

“The plumber and electrician were the only paid contractors involved in the project,” Mr Carter proudly stated.

“Our focus has always been on building the skills within our own membership.”

Mr Carter said the building expertise was garnered from research and hands-on experience with working on other smaller structures around the property over the years.

This do-it-yourself attitude is also reflected in the various websites, journals and radio programs that the members run.

While Mr Carter acknowledges that it is not practical for many people to adopt the same approach to construction, he says it was this scholarly ingenuity that made Mr Hughes such an inspirational teacher.

“He developed our centre within the Australian culture as a home-grown Buddhist organisation,” Mr Carter said.

“He used a lot of Australianisms in his teachings, which were very warming and made the students feel at home.”

Fittingly, the original foundation stone now lays encased beneath a transparent panel in the floor to remind the members and guests of the lengthy passage from vision to realisation.