Be a weekend Buddhist

Wollongong, Australia -- After Kabbalah, it seems to have more celebrity endorsement than any other religion, with actors Richard Gere, Goldie Hawn, Orlando Bloom, Uma Thurman, and even Star Wars director George Lucas all professing their belief in the Enlightened One. 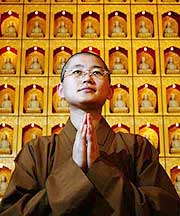 << MINDFUL ESCAPE: The southern hemisphere's biggest Buddhist temple, in Wollongong, Australia, is a great place to get a taste of a very now religion. ADAM McLEAN/Illawarra Mercury

So I jumped at a recent invitation to visit the largest Buddhist temple in the Southern Hemisphere – the Nan Tien Temple in Wollongong, NSW – to embrace the "om" and meditate my way to enlightenment. I could live without meat for one night, right?

Opened in October 1995 and built at a cost of $30 million, Nan Tien is the project of Master Hsing Yun, who has funded monasteries across the world for more than 40 years.

Meaning "paradise of the Southern Hemisphere", the temple is set in around 10 hectares of land in the twin shadows of the Kembla and Keira mountain ranges just south of Wollongong.

I was shocked when instead of paradise I found myself driving alongside enormous trucks past coal and steel works in an ugly business park, and was about to turn around when suddenly, from in between the smoke stacks, appeared an enormous eight-story, terracotta-tiled pagoda – a traditional octagonal tower that is used to house the ashes of cremated Buddhists.

Turning through the gates of the temple grounds, it was as though the sun came out, the birds started singing and all the colours appeared a bit brighter. This was more like it.

Walking past the tea rooms, water lily pond and the awesome main temple, I suddenly became acutely aware of my leather briefcase. Just how strict was this Buddhist lark anyway?

I knew I couldn't bring any alcohol, meat, seafood or unruly children – as the website advised – but I hadn't even thought about checking that my shoes, briefcase or belt weren't made of animal skin.

I hid my bag inside a larger canvas bag which unfortunately read "Don't panic: I know origami and pilates", and hoped to Buddha that no one would think I was taking the mickey.

Assuming that everyone attending the afternoon's vegetarian cooking class would dress in full religious garb, I put on some loose cotton fisherman pants that I had picked up on a whim in Thailand many years ago and never worn again.

Imagine my surprise when instead of shorn-haired monks or hippy types, sitting at the tables were men and women dressed up for dinner in dresses and collared shirts – some, I saw with some considerable relief, wearing leather shoes.

Silky tofu, tofu salad, tofu stir fry, tofu with rice, tofu burgers – all I could think was about how grateful I was that I had chicken for lunch and smuggled a chocolate bar on to the temple grounds, safely hidden inside my leather briefcase.

After dinner men and women of all ages arrived at the temple and begin walking around the grassy courtyard in a uniform circle while a man with a megaphone called out for them to "focus on the middle foreground" and "swing their arms wide".

Walking meditation – as I would later learn it was called – is the art of learning "how to focus the mind" while the body is active, and can actually put people into a deep meditative state.

However, I spent most of my time worrying about walking too fast or too slow and tripping over my neighbours' feet.

Eventually T'ai Chi began and we stood barefooted, spaced apart facing the temple as one of the reverends led us in the poses.

Usually embarrassingly uncoordinated, I was amazed that I didn't topple over, but the slow and steady choreographed motions were hypnotic.

To the voice of a Chinese girl methodically and loudly chanting "foo", "chi" (breath out, breath in), we stood doing the peculiarly-named poses like "white crane spreads its wings", and "rowing a boat across the lake", which nobody but me seemed to find funny.

Next we entered the main temple where five giant representations of Buddha sat majestically against the back wall in the poses of confidence, longevity, wealth, beauty and peace.

The air was thick with incense and 10,000 little Buddhas lined the walls, each lit up by little bulbs which flickered, looking like Buddha was winking at me.

After walking as slowly as we could around the room to slow our thoughts we took up our meditative positions on the prayer seats and, well. . . meditated.

The only problem is that nobody had told me how to meditate and I really wasn't sure what it was meant to feel like. Should I have been seeing a white light, or saying "om", or feeling the spirit of the enlightened one enter my body? Because I wasn't feeling any of this.

All I felt was a little cold with the doors open, my bum was sore because I wasn't comfortable and my thoughts were interrupted by the traffic noise of the nearby F6 Freeway.

Jealous of people afterwards describing how meditation has helped them "slow down and listen to themselves", or "given them time for me", I vowed to "find myself" in the early morning bell and drum ceremony.

It was just me and the sparrows when I arrived at the temple shortly before six am. Just as I was beginning to feel like I've been fed a line about the dawn service, a reverend appeared calling people to the service by banging a wooden block.

Two reverends (women monks) took up position above a giant two tonnes bell and a one tonne drum each suspended on either side of the temple doors.

The bell is traditionally rung at differing speeds 108 times to ward off the 108 worries of the world, as Buddhists believe.

The noise is like the sound of a deep booming gong, reverberating around the valley and calling believers to the morning chant, as it would once have been used in the countryside of China.

Stopping at the beautiful tea room beneath the main stairs on my way out of the temple, I reflected upon my day of Buddhism: it's not as easy as Richard Gere makes it look.

Far from meditating my way to enlightenment, the experience had only taught me how far I am from it. To be Buddhist isn't about funny poses of T'ai Chi, or the silence of meditation, it is about upholding the Dharma, or morality, of Buddhism in one's everyday life.

Looking at the easy smiles and calmness of the people who live here, I can only imagine finding the right path and feeling the light of Buddha is worth it.

But as I pick up my leather brief case and go immediately in search of a McDonald's, I can admit quite happily that it is not for me.

Nan Tien Temple is located on Berkeley Road in Berkeley, a southern suburb of Wollongong, NSW.

Accommodation at the Pilgrim Lodge on the temple grounds is available from $80 to $160 a night.