KEVIN Rudd didn't only win over Australians with his apology to Aboriginal people: he earned the praise of one of the world's most respected spiritual leaders - the Dalai Lama. 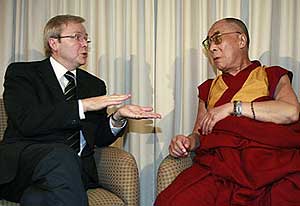 “I was very encouraged to hear on the news about the apology you made in parliament to all Aborigines for laws and policies that 'inflicted profound grief, suffering and loss' upon them,” His Holiness wrote.

“Overall, this was a timely, appropriate and civilised thing to do.

“Although, of course, this is not a matter in which I have any direct concern, because you and I know each other, I wanted to tell you how much I appreciate this kind gesture.”

This was not the first time the Dalai Lama has spoken to Mr Rudd about Australian issues.

Last year, both Mr Rudd and the then prime minister John Howard juggled their schedules around a visit by His Holiness.

They both eventually met with the Dalai Lama after initially saying they were going to snub his visit.