'I have been telling people to come here' Says Buddhist Monk

CANBERRA, Australia -- Thich Quang Ba, a Vietnamese Buddhist monk from the Vanltanh Temple in Canberra, was a guest at the opening night of the Chinese Spectacular and was impressed by the skill of the artists as well as the important moral messages of the performance. 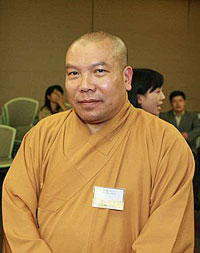 << Vietnamese Buddhist monk, Thich Quang Ba, was impressed by both the artistry and the moral message of the Spectacular. (Richard Sun/The Epoch Times)

"The arts presentation of this show is excellent A lot of effort a lot of training a lot of preparation," said Thich Quang Ba.

"But for me, alone, it is more important — it's not about the appearance, but the message behind the presentation," he continued. " … reminding people how to have good character, good nature and to achieve peacefulness, in our life in our community … the cultural show also carried with it a lot of Buddhist and moral messages, that's to me more important."

Although this was the first time Thich Quang Ba had attended the Chinese Spectacular, he said: "I have been telling people to come here.

"For me, behind the whole thing, the Buddhist teachings and Buddhist messages is very valuable to a lot of people."

Thich Quang Ba spoke about the scenes depicting the current persecution of Falun Gong practitioners in China. "I know a little bit about Falun Gong. They carry a lot of Buddhist messages. I haven't done sufficient research, but I know they are suffering under the policy of the Chinese Communist Government."

Having come to Australia 25 years ago as a refugee from Vietnam himself, he said: "It's quite similar with us Buddhists in Vietnam under the iron hand of the communists in Vietnam. I know what persecution feels like; I have experienced it myself."