Finding the meaning of life in secluded surroundings

Impressions on visiting a forest monastery in Sydney

Sydney, Australia -- A cartwheel symbolising the ‘dhamma cakra’ greeted us at the entrance to Santi Forest Monastery located in a 150-acre eucalyptus forest in the rugged landscape of Australia’s Southern Highlands about halfway between Sydney and Canberra. 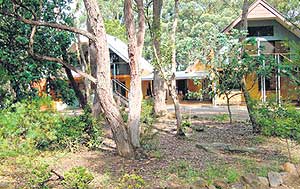 With farmlands surrounding the monastery, the atmosphere is serene and peaceful. There are no gates or barbed wire fences to demarcate the property. Trees aplenty provide a natural fence. Established by Bhikkhu Sujato with his teacher, the renowned meditation master Ajahn Brahmavamso, it is owned and managed by Citta Bhavana Incorporated, a non-profit charity.

The monastery offers residential and educational facilities to Buddhist monks who wish to train themselves in the forest meditation tradition with the aspiration to realize enlightenment. The training emphasizes devotion to meditation in seclusion, monastic discipline, contentment and simplicity as a foundation for building a mature and harmonious spiritual community, and the study of Buddhist scriptures with special emphasis on comparative and historical inquiry into the scriptures common to all schools.

When we visited the monastery one afternoon without any prior announcement, Ajahn Sujato was away in Buddha Gaya attending a gathering of monks from Asian countries reciting the stanzas from the Tripitaka. The young monk who greeted us took us to the dhamma hall in the upper deck of the two-storey timber structure where a solitary lay person was meditating in a corner. The fairly large hall was empty except for a medium size statue of the Buddha at one end.

The young Australian monk having got himself ordained in Burma is continuing his meditation under the tutorship of Bhikkhu Sujato. He had spent one year’s apprenticeship in Burma prior to getting ordained. Having been a ‘samanera’ for another year he had recently obtained higher ordination. “I am keen to continue my meditation because I have realised that is the only way for salvation,” Bhikkhu Jaganatho told us in his quiet composed voice. Having heard about facilities for meditation from a monk who had spent some time in Si Lanka, he is planning to go to Sri Lanka by June this year and spend a few years. “The monk was very impressed with the training he received under Ven. Nauyane Ariyadhamma Thera and strongly recommended going to his aranyaya. I am looking forward to going there,” he told us.

What attracted him to Buddhism, I asked him. “I was born a Christian, but as I grew up I did not find it exciting to go to church every Sunday and listen to the priest. I started looking for something more meaningful where I could think on my own and make decisions rather than being dictated to by someone. Even the money and the fairly comfortable job I had did not impress me,” he said.

He changed jobs and also joined the university as a part-time student. “I was involved in distribution in this new job. One day my area manager asked me to get some figures ready for the next day’s planning meeting. He wanted me to show an increase in sales for which I had to adjust the figures. I thought about it and decided not to do any adjustments. When the manager asked me the following morning for the report, I said I had not done it. He gave me 15 minutes and when he came back, I told him I didn’t do it. In two days I lost the job. I was not upset and never even thought of challenging their decision to throw me out.”

While reading for his degree, he studied topics on Buddhism which were relevant to his subject. “The more I read, I was convinced that I had found the path I was looking for. The Eightfold Path that the Buddha had preached was that path.” When he decided to don robes he preferred to be ordained under the Burmese tradition and went across to Myanmar. “Life was tough. I found it hard to get used to the local food. Yet the determination to get on to the right path made me push ahead,” he recalls. Today, he has no regrets.

The other monk, Bhikkhu Moneyya hails from America. As a young man he was thoroughly disillusioned with “the meaningless Vietnam war that our country was involved in”. He quit the country and started looking for a more meaningful way of life. “I roamed all over Europe enjoying what young men at that time thought was the best for them. At the end I was once again fed up of what I went through. I went back and started seriously looking for an alternative.” While in Europe he had read about Buddhism but what attracted him to become a Buddhist was his meeting with Ven. Henepola Gunaratana Nayaka Thera when he went back to the States. “I was most impressed by what he told me and I began studying Buddhism in earnest,” he said.

He too ended up in Myanmar getting ordained in the Burmese tradition. Finding life there quite trying, he moved to Australia and is now at the Santi monastery spending his time in meditation.

Although Santi monastery is essentially a place for monks, lay people can also stay at the monastery, meditate and experience monastic life. A huge cave is being built away from the present temple premises where over 50 people would be able to meditate. Bhante Sujato also conducts retreats in a community hall in Bundanoon.

Those who wish to offer alms can do so by prior arrangement. They can participate in a Dhamma discussion from noon to 1 p.m.

Just as we stepped out of the monastery we saw a wallaby, a smaller version of the kangaroo, munching its food. It heard our footsteps, looked up but soon ignored us and continued to enjoy its meal. “He is our friend. We feed him, so he comes around to enjoy our company,” Bhikkhu Moneyya said.