Kyogle, Australia -- You can still be a Buddhist and pay the bills. 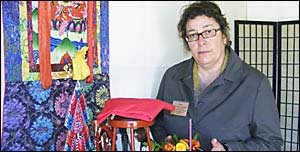 This was the how Gesar Springs Community group representative Simon Thomas described the relationship between faith and business during a meeting at the Vajradhara Gonpa Buddhist Retreat Centre in Kyogle yesterday.

After 30 years as a Buddhist retreat run mainly by volunteers, stakeholders and community members met at the centre to discuss the economic viability of the 80-hectare property.

Mr Thomas said the centre, which ran the nation's first three-year Buddhist retreat, was built by the heart and not the wallet, however 'times had changed' and many of the volunteers were getting old.

Business consultant Samantha Muller said a five-year business plan would be developed for the site and would start once the next three-year Buddhist retreat finished in 2012.

"We want to make this quiet achiever into a regionally significant showcase," she said.

"However, we don't want to dilute the Buddhist values this place holds."

Administrative director of the three-year retreats at Vajradhara Gonpa, Paula Raymond-Yacoub, said the centre had come to a critical juncture and was keen to explore plans that would benefit the community and residents.

"Even those visitors who are not Buddhist know they have come to a special place," she said.

Administrator for the three-year retreats, Kate Miller, said the Kyogle community had benefited from the centre socially through a number of residents becoming counsellors, special carers, or within the Buddhist group, as well as economically.

The last three-year retreat injected $1.2 million into the region and Ms Miller confirmed most of the food bought for the 23 participants was purchased in Kyogle.

Ms Miller said a draft business plan should be complete by February 2009, when the community would be enlightened on the facilty's future.