Adelaide, Australia -- Two monks have been assaulted at a Buddhist monastery on Adelaide's northern fringe. 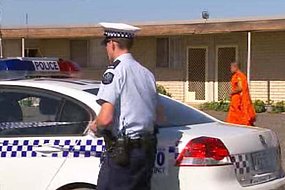 << Two monks bashed during a robbery at a monastery (ABC News)

Police say up to eight armed men smashed their way into the monastery in Symes Road at Waterloo Corner at about 2:00am ACDT.

The Cambodian monks were threatened and tied up as the offenders damaged property and stole a suitcase of cash, passports, a statue and religious books.

The offenders had a knife, batons and sticks.

One of the monastery residents, Sarone, said the attack was unprovoked.

"He cut the monk, tie up another guy, hit the monk, hit other guy and they [were] laughing," he said.

The injured men were later treated for facial wounds at Lyell McEwin Hospital.

Police say the offenders were between 17 and 25 years old and had claimed to be immigration officials as they broke into the premises.

The monastery has been robbed before and monks attacked.