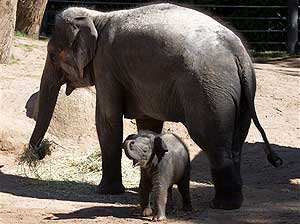 << In this Feb. 25, 2010 photo provided by the Melbourne Zoo, Mali, a baby Asian elephant, born at the zoo six weeks ago, walks from beneath her mother Dokkoon after a naming ceremony performed by Buddhist monks in Melbourne, Australia. Mali is Thai for jasmine and was chosen out of five possibilities derived from her Thai lineage in a public vote held by the zoo. (AP Photo/Melbourne Zoo, Martin Terlecki)

The calf, just under six weeks old, is the second elephant born in Australia and has become the main attraction at the zoo since her Feb. 10 debut.

The Thai Buddhist monks hummed and chanted as Mali played with the ball and ran circles around her mother, Dokkoon, who was brought over from Thailand in November 2006 as part of a program facilitated by the Thai government.

Mali's name was chosen last week by 23,000 Victoria state voters from a list of several suggested by the Thai consulate. Mali is Thai for jasmine.

Elephants are a hallowed national symbol in Thailand, having been long linked with good luck.

"It's a beautiful name for a beautiful calf," said zoo keeper Dan Maloney. "She's growing very quickly, getting more coordinated every day and certainly exploring her world and getting to know her surroundings."

Having bonded with her mom, she is gradually being introduced to other females in the herd. Maloney said he hopes she will be integrated with the four other elephants in the next few months.

The first elephant born in Australia was a male calf at Sydney's Taronga Zoo in July.