Buddhist temple in Nerang gets go-ahead under strict conditions

Nerang, Australia -- BUDDHISTS are feeling a little less than serene after the Gold Coast City Council imposed tough conditions on a planned temple to pacify locals. 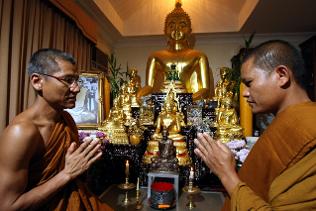 << Thai Buddhist Monks Phra Arun Panyavaro and Phra Apinan Apinanto are happy that Gold Coast City Council have given the green light to the building of a Buddhist Temple at Nerang. Picture: Adam Head Source: The Courier-Mail

The council has capped the number of worshippers at the proposed Nerang temple and imposed more than 60 other conditions after 44 residents petitioned against the development and a God-fearing councillor also voiced concerns.

The $1 million temple and monastery was approved yesterday by the council's planning committee but only after the Buddhists cited their teachings to fight even stricter conditions, including a massive reduction in the size of the 15m high Thai-style building.

"That the applicant would, in conscience, set out to cause environmental or other community harm is unthinkable and contrary to the teaching of all the Buddhas: the doing of good, the avoiding of evil, the purification of one's mind," the Thai Buddhist Community of the Gold Coast said.

"The application should, and must, be assessed on its individual merits, and not on the matters of little town planning or design relevance."

Local councillor Peter Young had questioned whether the temple was "culturally relevant" for Nerang and expressed concern about its size.

But he and fellow councillors backed down yesterday after the Buddhists argued a council bid to scale back the building by almost 20 per cent was "inappropriate". They said the temple needed a "presence in keeping with Buddhist traditions . . . not to be confused not as a statement of bigness or monumentalism but as an expression of warmth, of invitation, all-embracing oneness, harmony with spirituality and physicality intertwined".

The Buddhists hoped to cater for as many as 300 worshippers but the council capped the number at 80 and imposed strict parking conditions.

Robert Fraser, treasurer of Thai Buddhist group Wat Sangharatanaram Inc, said: "Life is much easier if the conditions aren't in there."

But he said the Buddhists were happy to comply to win approval and allay community concerns. "Residents will not hear bells chiming or anything like that," he said.