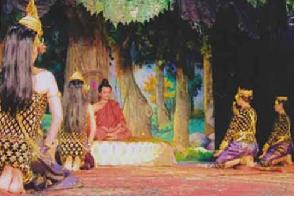 Why did the Indian Council For Cultural Relations (ICCR) hold the First Buddhist Festival of Performing Arts recently?
Buddhism travelled from India to South East Asian countries through different routes. A lot of trade took place through the Silk Route; part of the silk route was also used by the Chinese Buddhist pilgrim Hiuen-Tsang. Interestingly, there are a lot of cultural similarities in the countries where Buddhism is a prominent religion. For instance, in Singapore and China, there are very colourful lion and dragon dances. In India also, there are similar dances in Arunachal Pradesh and Ladakh. The hand gestures in these dances are similar.

I realised that Buddhism, wherever it travelled from India, also carried cultural influences with it. Music and dance are inspired by spiritual and cultural beliefs, and if there is a common belief in Buddhism, there will be similarities. Gradually, Buddhism evolved from being a philosophy and became a cultural phenomenon as well. So, what better way than to explore this idea through a festival of performing arts, and that too, in the country where Buddhism was born?

What are the factors driving Buddhist revival? Celebrity interest?


Celebrities make for an interesting headline, nothing more. The countries in which there is an upsurge of interest in Buddhism, are actually places where it has always been present.
Buddhism talks about tolerance, peace and mutual understanding; it is against conflict. In the sixth century, it rebelled against prevalent hard-line ritualism. It had a soft structure that helped accommodate people from different cultural backgrounds into its fold. Today, people are looking for peaceful existence within society. Buddhism has always been a strong force. In some countries, Buddhism has become a part of the social structure, so any threat to Buddhism really meant threat to society.

Why did the Chinese reportedly object to the Buddhist meet?
Chinese objections were because of the presence of the Dalai Lama. I don't think that culture can create any kind of friction - on the contrary, it can only strengthen relationship between two people. We were not dealing with the Buddhist congregation, so we didn't face any difficulties.

The Chinese are investing in the Nalanda project. Do you think it's their attempt to impact spirituality in the region?
The Nalanda Project is a multilateral one in which ASEAN countries have a stake. India is piloting the project. Buddhism has a shared history and culture, especially among countries where it is still prominent. Most Buddhist pilgrimage sites are in India. We should recognise the importance of Buddhism as a link between India and South East Asian and East Asian countries, and work on promoting the knowledge which Buddhism offers, without getting into a trap of trying to influence each other. Buddhism has a very special place in India because it was born here. It's like a building block of relationships at an international level.

How did Buddhism influence Indian and Chinese societies?
In the beginning, Buddhism remained centred in India; slowly, a lot of Hindu influence began to creep into Buddhism. Buddhism came about as a rebellion to the brahminical cult, but there was a slow absorption of Hinduism in Buddhism. There is an 'Indianness' to all religions that thrive in the country and it pervades all religions, no matter where they come from. Even Christianity in India is different from Christianity in other countries.

Buddhism is a strong phenomenon in Chinese society. There was a period when Buddhist monasteries were attacked, but later there was a resurgence. Today, a lot of original source material on Buddhism is available in China.