Kyoto, Japan - The Temple of Sanjusangen-do located in Kyoto, Japan, housing over 1000 wood-carved, gold-leaf-covered, statues of religious figures dating from the Thirteen Century, is one of the most outstanding cultural treasures of Japanese Buddhism.

The Temple of the Lotus King 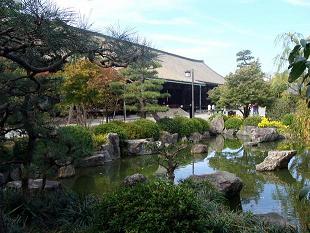 << Japanese-style garden at Sanjusangen-do Buddhist Temple, Kyoto, Japan. The Main Hall can be seen in the background.

The number 33 has a special meaning in Buddhist religion. It relates to the 33 forms that Kannon, the Lord of Compassion, or the Goddess of Mercy, can adopt for the purpose of saving humans from danger and distress, and confer prosperity and happiness to those who pray.

In Buddhism, Kannon’s gender is imprecise; it could be male or female, with the principal attribute of being one “who sees and hears” all those who struggle and plead for help and salvation. Kannon, one of the most widely worshipped divinities in Japan and all Asia is a “Bodhisattva” (a.k.a. Bosatsu), meaning a being who has enough merits to achieve “enlightenment” (reaching Nirvana), but remains behind to listen to people’s problems and help those in trouble.

Sanjusangen-do temple dates from 1164. It was built in Kyoto at the request of Emperor Go-Shirakawa (1127 – 1192), who was a respectful devotee to Kannon Bodhisattva and made great efforts to bring peace and prosperity to his country by propagating the Buddhist faith. The original hall had only 124 standing statues of Kannon. In 1249, the building was lost in a fire, but the statues were saved. The hall was reconstructed in 1266 in the same style as the original structure. Since 1266, the building has been renovated four times, but its general appearance remains about the same as it was in the XIII Century.

The work of sculptor Tankei

The acclaimed Japanese sculptor Tankei (1173 – 1256), with two nephews and about 70 of his disciples, Buddhist sculptors from Kyoto and Nara, restored the original 124 statues saved from the fire, created the large, central seated statue of the Goddess of Mercy, carved 876 additional figures of the Kannon Bosatsu, the 28 guardian deities charged with defending Buddhism and protecting all the Kannon images, plus two additional statues representing the gods of wind and thunder.

Currently, the temple houses 1,031 statues, which as a group is probably the largest and finest collection of Buddhist Art in Japan. These statues are considered a National Treasure or valued as Important Cultural Property of Japan. 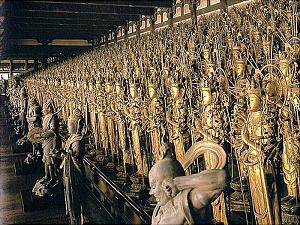 << Part of the 1000 images of the Kannon Bodhisattva at Sanjusangen-do Temple. Some of the 28 attendants or Guardian Deities can be seen in the front row.

The temple’s principal deity, Senju Kannon or the Goddess of Mercy, is a 3.4-metre-high seated image of hollow multi-block construction, coated with a lacquered finish and covered with gold-leaf. The image has the hands pressed together in front of her chest, as a sign of being respected.

At each side of the principal image, there are 500 life-size (about 1.6 meters tall) Kannon statues carved in Japanese cypress and also covered with gold-leaf. They are placed on ascending platforms in 10 rows of 50 statues.

The 1000 statues are very similar; however slight differences can be observed in the expression of the eyes and the face of each image. Additionally, some statues are thinner than the others and in some cases the clothing also shows small differences.

Twenty-eight Guardian Deities In a straight line, in front of the rows of Kannon images, there are 30 statues representing 28 Guardian Deities which are attendants or protectors of Kannon and those who respect and believe in Kannon. Standing at each end of the front row, there are two images portraying Raijin, the God of Thunder and Fujin, the God of Wind. The images of the guardians originate in Indian Buddhism, and they have Japanese names, but are also known by their names in Sanskrit, the ancient Indo-Aryan language used as academic, literary and sacred language of Hinduism and Buddhism.

These statues are also life-size and measure between 1.56 and 1,70 metres. Depending on their function or mythical attributes, they have either peaceful expressions and hold musical instruments, or they have fierce, irate expressions, show muscular bodies or wear armor and hold weapons. Several statues have crystal eye-balls conveying a realistic expression to the eyes and face.

The statues of Sanjusangen-do are a significant example of the cultural legacy and the impact of Indian Buddhism on Japan’s political, religious, and artistic development. Each statue in this temple, including the 1001 images of Kannon and the guardian deities, is independently very beautiful, but the impact of over a thousand of them remaining together for over seven centuries, and being displayed as a group, is breathtaking.

Photography is not permitted inside the temple. This report contains pictures taken on the grounds of the temple, images photographed by the author of this report from a book on the subject, and one image found online.