Dunhuang: Buddhist Art at the Gateway of the Silk Road

A reproduction of a sixth-century pillar at the Mogao Caves, at the China Institute Gallery.

New York, USA -- China Institute routinely packs a wealth of art and information way out of proportion to its two tiny galleries, which at present hold a distillation of one of China’s greatest Buddhist art sites, the Mogao Caves near the far western oasis city of Dunhuang. 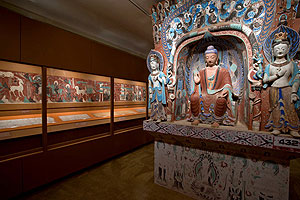 According to legend, the caves originated some 2,000 years ago with a miracle: a wandering monk camped by a desert cliff heard voices encouraging him to stay. He chiseled a shelter out of the rock and hunkered down. Other monks joined him; a community gathered. More caves were excavated, some as spaces for worship, and these were adorned with frescoes and painted clay sculptures. As Dunhuang became a commercial hub on the Silk Road, the caves, numbering in the hundreds, became a pilgrimage destination, and remained one for centuries until trade routes shifted, traffic stopped and Mogao was forgotten.

European explorers rediscovered the place in the 19th and early 20th centuries and pillaged it, carrying off thousands of manuscripts and paintings stored in the so-called Library Cave. At the end of the 20th century, the caves began to attract tourism, which posed major threats to the art.

To save it, the group of archaeologists on site and conservators known as the Dunhuang Academy, is building an elaborate visitor center nearby, which will serve as a museum and offer a surrogate cave experience as access to the real caves becomes restricted.

The China Institute show - organized by Fan Jinshi, director of the Dunhuang Academy, with Willow Weilan Hai Chang, director of the China Institute Gallery - gives a sense of what that experience might be like. A handful of the precious Library Cave manuscripts still at Dunhuang are on view, including two Buddhist sutras written sometime between the third and sixth centuries, and a fragment of a mathematical treatise in Tibetan.

There are also small stucco figures of bodhisattvas, all with traces of paint, all once attached to cave walls. The second gallery has been transformed into a cave, or a painted fiberglass model of one, filled with sculptured figures and painting.

The sensation you get, of being a passenger on a crowded elevator up to the Pure Land, gives a sense of why a visit to Mogao is still so transporting.