Osaka, Japan -- Pure Land Buddhism, which began in India around the 2nd century B.C., offered a path to salvation for those who found difficulties with the more rigorous forms of Buddhist practice. 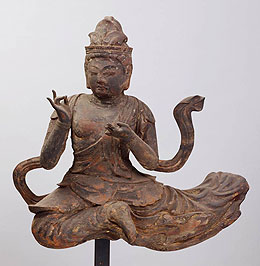 It later spread to China and, by the 6th century, to Japan, where it is now the second most popular form of Buddhism.

This exhibition features paintings, sculpture and other works related to Pure Land beliefs, which in Japan is taught by four sects Jodo-shu, Jodo Shinshi, Yuzu-nembutsu-shu, and Ji-shu. Some of the highlights include “Tosotsuten Mandara” (“Mandala of Tusita”), which depicts the fourth devaloka (plane of existence) in the realm of desire, and the “Hiten” (“Flying Apsara”); Jan. 10-Feb. 11.