Buddhist Art of the Himalayas Show in Pasadena

Pasadena, CA (USA) -- A new art exhibit in the Los Angeles area presents a detailed look at Himalayan Buddhist art. The show, entitled In the Land of Snow: Buddhist Art of the Himalayas, opens this weekend at the Norton Simon Museum in Pasadena. The exhibit runs until August 25, 2014. 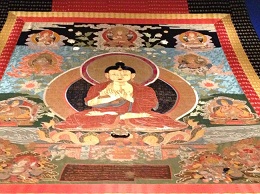 The exhibit includes Indian, Tibetan and Nepalese Buddhist sculptures and paintings from throughout the Himalayas. Many are from the museum’s vast collection of Eastern art augmented with loans from the USC Pacific Asia Museum and the Asian Art Museum in San Francisco. The approximately 40 works demonstrate the artistic history of the region over a 1,300-year period. They include several iconic watercolor paintings on fabric, and carvings of Buddha and other deities.

A highlight of the exhibit is a more than 20-feet-high thangka (a type of flat field painting on fabric), constructed of appliqued silk and adorned with intricate painting, that was commissioned by the eighth Dalai Lama to honor his tutor and the Buddhist faith. Thangkas are traditionally three-dimensional picture panels with embroidering or textiles mounted on wooden dowels that were commissioned as tokens of thanksgiving and aids to meditation. Their quality, the richness of the brocade that has been painted and the amount of gold used demonstrated the financial status of the patron. The tremendous thangka in the Land of Snow exhibit depicts the Buddha of the Future, Maitreya, in the center flanked by the Dalai Lama and his tutor.

The show in Pasadena includes many Buddhist Art sculptures in gilt bronze and wood carvings depicting gods and goddesses, including a beautiful rendition of Tara, monks and leading gurus that tell the story of the migration of the religion across the Himalayas from India to Nepal and Tibet. Some of the woodcarvings were made as book covers. One from the 15th Century depicts Buddha in physical representations of equanimity, non-duality, accommodation, inquisitiveness and accomplishment. There is also a 15-16th Century gilt bronze sculpture which depicts Padmasambhava, the Indian-born monk who was invited by the king of Tibet in the late 8th Century to introduce Buddhism to his country.

The show also features several mandalas, which are schematic diagrams with complex circles or designs surrounding the particular deity portrayed in the center. The deity serves as a focal point to allow devotees to focus and meditate on the mandala, while visualizing themselves attaining enlightenment. The mandalas and other thangkas in the show have watercolor centers on cotton with very detailed items that undoubtedly were painted with single hairs or amazingly delicate brushwork.

About The Norton Simon Museum

The Norton Simon Museum houses one of the most remarkable private art collections, which was assembled over a 30-year period by industrialist North Simon who built a floundering Depression-era bottling company into Hunt Foods, which included Hunt-Wesson, McCall’s Publishing, Canada Dry, Max Factor and Avis Car Rental. In the 1970s, Simon and a Board of Trustees assumed control of the Pasadena Art Museum and incorporated Simon’s phenomenal collection with the Pasadena one.

In addition to the Himalayan and other South Asian art on display, the Norton Simon features European art from the Renaissance to recent times. Highlights include  Portrait of a Boy by Rembrandt van Rijn, Madonna and Child with Book by Raphael, Mulberry Tree by Vincent van Gogh, and Little Dancer, Aged Fourteen by Edgar Degas. There are also numerous sculptures, including many Henry Moore works, out among the garden grounds.

The Buddhist Art of the Himalayas show and the museum are located in Pasadena, California, near the Old Town section. It is open every day except Tuesday. Parking is free and the museum is accessible by public transportation.