Dharmsala, India -- If you are a mountain person and the Himalayas fascinate you, there's no way you haven't been intrigued by the Buddhist prayer flags. 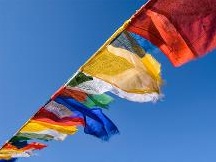 Brightcoloured blocks of cloth strung along your way with inscriptions have become a common sight of late and an inclusion to your homes and vehicles to bring in positivity. Here's decoding the Buddhist Prayer Flags that lend a vibrant dash of hue to the snow-clad mountains.

Depending on how the cloth is strung on the pole or a string - vertically or horizontally Prayer Flags are divided into Dar-ding and Darchor (flagstaff).

Dar-ding flags are either square or rectangular and are connected to a long thread hung on a diagonal line from high to low, between two objects like a rock or the top of a pole. They are most common ly found on temple tops, monasteries and mountain passes.

Darchor, on the other hand, are rectangular in shape affixed to poles along their vertical edges. They can be spotted on mountains, memorials and landmarks.

Symbols and their significance

A Lung ta or wind horse, with flaming jewels on its back, is at the centre of prayer flags.Flaming jewels represent the Buddha, Buddhist teachings and the community .With mantras and prayers for long life and good fortune surrounding the figure, there are also images or at times, names of four animals, namely , dragon, garuda, tiger and snow lion.

Covering the rest of the flag are versions of mantras that purify the air and pray for the life and fortune of the person tying the flag.

The prayers are supposed to be blown by wind to spread goodwill and compassion all around. It symbolises life's welcoming changes and acknowledges that all beings are a part of a greater ongoing cycle.