To a tea: Aged Japanese teapots

Orange County, CA (USA) -- The Japanese have a name for the art of finding beauty in objects that are imperfect, rustic or primitive. They call it wabi sabi. 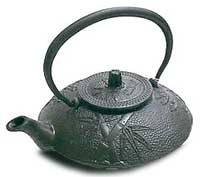 Because the roots of wabi sabi stem from Zen Buddhism, there is an important spiritual component to it. Pared down to its essence, the philosophy celebrates elements that are weathered, worn and rusted in an appreciation of the passage of time. Several home-design books have recently focused on incorporating the aesthetic into the modern home.

For those who love Asian antiques, wabi sabi comes naturally. It can be found in the rustic beauty of a Japanese cast-iron teapot, called Tetsubin.

The Japanese have been using Tetsubin teapots for centuries. Families used the cast-iron teapots as kettles hung over a flame. They originally were used daily for heating water for household needs. Their role changed in the mid-19th century, when tea from China became affordable for the masses and the process of making tea evolved from using a powdered form to whole tea leaves, called Sencha. Because the Chinese styles of teapots were expensive, a Tetsubin was used.

Despite these common roots, the cast-iron teapot also played a role in the Japanese tea ceremony. The design of the ceremonial hand-cast teapot was considered art and reflected the status of the owner.

"Teapots used in the tea ceremony were very prized," said Leslie Wolcott, a Laguna Beach, Calif., antiques dealer. "The ornamental ones were often passed on from generation to generation."

The owner of Wolcott Asian Antiques said she appreciates Tetsubin for their "artistic beauty" and buys them whenever she can find them. She often has several at her shop on Pacific Coast Highway.

The ornamental Tetsubin with intricate relief designs and inlays of copper, gold and silver were reserved for the tea ceremony, Wolcott said.

Identifying marks left by its maker are sometimes found under the lid.

Most of the Tetsubin found in California date from 1900 to 1940. The value of an unadorned Tetsubin can range from $150 to $200, to thousands of dollars for a more ornamental piece. For example, a small Tetsubin made by a famous swordmaker in Japan sold for $35,000 at a Christie's auction last year, Wolcott said.

Japanese tea bowls and other ceremonial accouterments can also run into the thousands of dollars, she said.