Kuala Lumpur, Malaysia -- It was about understanding Buddhism through drama, dance and music. We were completely immersed in the moment in The Perfect Circle, at the Kuala Lumpur Performing Arts Centre. 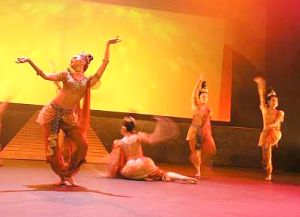 << Among the spectacular performances in the four-part The Perfect Circle staged by Musical On Stage Productions.

“In the moment” was a phrase that kept cropping up throughout the spectacular performance in four parts.

They were Karma and Samsara, The Buddha and Rahula, The Great Sixth Patriarch of Zen Buddhism and The Great Compassion. Each segment was punctuated by a question and answer between emcee T.P. Lim and the Venerable Manya.

The Taiwan-born Manya, travels all over the world from her base in Pretoria, South Africa, in her mission to reach out to people of different cultures.

The sets, the visual projections and the costumes were stunning. So were the performances by the dancers, actors and singers, under director Ho Lin Huay, and music by Imee Ooi.

It was a world-class production that should win kudos abroad, as well.

It was not only about Buddhist values, but lessons of life, giving it a universal resonance for people of all faiths.

Karma and Samsara deals with the Buddhist belief in the cycle of rebirth. A monk meets a jailed murderer haunted by nightmares about his victim and fears going to hell.

The monk tells the remorseful man that his karma is bound with the dead person, for all time. 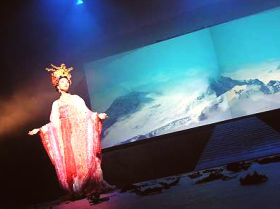 He leads the prisoner through his previous lives, with the different scenarios acted out on stage.

“You were the woman who committed suicide, who poisoned her friend, and the soldier who was killed. You killed again in this life. He stays in your heart. You should let go ...”

Manya’s response to Lim’s question “Do I have to believe in rebirth to be a Buddhist?” was: “In Buddhism we believe in new born not reborn. What we have is now, why let yesterday bother you?” Cut to a palace scene, with Buddha’s first visit to his wife and son Rahula after his enlightenment.

Rahula asks for his inheritance from his father; Buddha tells him to become a monk.

Buddha teaches him a lesson using a basin of water his son has brought to wash his feet. “You don’t behave yourself; you are like filthy water. You will be like this basin (Buddha kicks it away). No one will respect you and you will not attain enlightenment.” The boy begs for forgiveness.

To a question by Lim about people who let their parents run their lives, Manya replied: ”We have to know who we are but sadly parents do not allow us to do this. It’s easy to please people but deep down there is cover-up. When younger people have this emptiness, they walk away from their real mind.”

The Great Sixth Patriarch of Zen Buddhism touched on the human side of monks. Master Hui Neng is an illiterate peasant boy who overhears a man reciting the Dharma Sutra and becomes enlightened.

He endures a long journey to meet the fifth patriarch and is conferred the robe.

But Hui is then sent away, for his own safety.

In Zen Buddhism, as Lin Huay explained later, interesting dialogue does not need written words, but can be expressed through the heart, or the mind gatha.

A talk by Lim after this segment likened meditation to a “mental gym”. The body doesn't need it, as it can heal itself, replied Manya. But the practice helps the constantly agitated mind to “sit somewhere” for a short time.

“An enlightened being is willing to support, give and forgive and make an effort to do something right.”

Manya’s thoughts on death were cryptic. “Sickness is a signal to slow down and rest. One cannot die from illness, which only helps you to become better. One can die from ageing like a piece of clothing you have to take off.

“Work with the body and your last breath will have no pain.”

The finale was on The Great Compassion, in the billions of kalpas ago.

Buddha told Avalokitesvara, the guanyin, to recite the Great Compassionate Mantra to liberate all souls from the cycle of rebirth.

Despite 1,000 hands and eyes, he could not fulfil the vow and cried.

Legend has it that the Tang princess Wen Chen who brought Buddhism to Tibet was the reincarnation of Green Tara.

The princess appears among the audience in a splendid scene, dazzling in the dark as she walks towards the man who would be her husband in the summit of the world. Falling leaves, snow, and a dance by the Tibetan people clinch this finale.

And the audience are given brooms to sweep up the leaves and “snow”.

And Manya’s thoughts on this part? “When one is compassionate, one is enlightened.”