Vancouver, CA -- The tray-card photo of Akron/Family's second CD, Meek Warrior, features the four Brooklynites paddling a canoe. Promotional photos of the band show the quartet in the water, sunning themselves post-swim and hiking up a cliff. 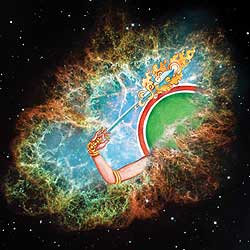 The psychedelic jazz-folk group, which resembles a band of tree-hugging hippies, even has a song titled The Rider (Dolphin Song).

"I would hesitate to say that any of us are totally outdoors types, but we all grew up in smaller towns," he says.

"None of us grew up totally in the woods, but none of us are from cities, either."

Olinsky is originally from Williams-port, Penn., as is singer/multi-instrumentalist Dana Janssen. The small borough was a nurturing environment for the two musicians, but it's a far cry from Akron/Family's current residence in Brooklyn. So, Olinsky plans on heading west for some peace and quiet.

"I'm thinking about moving to Victoria some day," he says.

"We've toured all over the place now, and I've tried to be aware of what places I like. A lot of it blurs together, but (Victoria) just kind of stands out. It was so beautiful and the temperature was really amazing. My girlfriend and I were even thinking about coming to visit for a whole month in January, but we couldn't quite find a place to get it organized."

He remembers where and when they played Victoria previously, and he remembers driving down-Island from Nanaimo.

That, in itself, is amazing given the amount of time Akron/Family spends on the road.

"We've gotten into the habit of playing an hour-and-a-half, two hours every night, so it takes its toll," Olinsky says.

The band, which also includes fellow singers/multi-instrumentalists Miles Seaton and Ryan Vanderhoof, just wrapped recording on their new album, which is due out in May. It was the first collection of material written specifically for an album; previously, Akron/Family recorded songs that had been kicking around for years.

In an early incarnation, the band consisted solely of Olinsky and Seaton. Recording sessions were folksy affairs, captured on a four-track in Olinsky's apartment.

Nowadays, songs like Blessing Force -- nine minutes of freak-jazz bombast from September's Meek Warrior -- show how far they have progressed.

The whole process seems like an awful lot of fun, but there's a seriousness as well. Olinsky says there's a spirituality at work "on multiple levels," both in and out of the band.

"On Meek Warrior, a lot of the songs have Buddhist influences. Some of the titles are taken from texts or some of the ideas or feelings (of Buddhism). We all have our different thoughts and philosophies about that side of things. We're not trying to preach some specific things to anybody, but (Buddhism) is definitely a big part of all of our lives in different ways. It's part of it, for sure."