Artist never intended to be a Buddhist painter

Tokyo, Japan -- Like many students, as a senior at Tokyo-based Keio University in the 1970s, Kenji Babasaki didn't know what to do with his life. 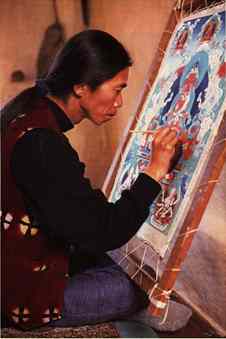 But during a trip to Nepal and India, Babasaki caught his first glimpse of the exquisitely detailed Tibetan Buddhist art form known as "Thangka." He was smitten.

"I was not able to imagine how humans could do produce such minute paintings. I was really impressed," Babasaki says.

After graduating, he returned to India in 1977. It was then that he met renowned Thangka master Jampa Tsetan.

Babasaki became a disciple, learning the intricacies of the art from the master for 11 years until he died.

Last month, Babasaki, 54, held a private exhibition in Tokyo to celebrate the 30th anniversary of the start of his career.

He still lives in Dharamsala, northern India, home to the Tibetan government in exile.

"(Before I saw Thangka,) I was not interested in paintings," Babasaki said at the gallery in Ginza where the exhibition was held.

"But (after seeing the art form,) I decided to devote my entire life to it. The devotion is guided by Buddha. I can't explain it any other way."

Over the course of his career, Babasaki has completed about 130 Thangka paintings. They are used to help meditation. Big pieces take more than three months of painstaking work to complete.

Children and grandchildren of Tibetan refugees who fled to Dharamsala from China often come to Babasaki to learn the art. However, Babasaki said many give up quickly.

"Not only in Thangka (but also in other fields), young people lack the will to value their own cultures," he says.