Sapporo, Japan -- Sand artiste Sudarsan Patnaik has created a sculpture of Lord Buddha on snow in Japan while participating in an annual international snow festival. 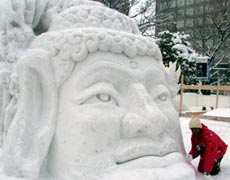 Patnaik, who was the lone Indian participant, said Thursday he had created a face of Lord Buddha at Sapporo city where the 34th International Snow Contest had begun Feb 3. Eighteen countries had participated in the event.

'The height of the image I created is 10 ft and it took me over 48 hours, to make it,' Patnaik told IANS from Japan over phone. The image was captioned 'Budhha for World Peace', he said.

'I chose to create the image of Buddha because my home state has several Buddhist sites,' said Patnaik, who belongs to the coastal town of Puri in Orissa.

'This is not the first time I created an image on snow. I did snow sculptures twice, including that of the Taj Mahal,' said the artiste who has participated in 31 international sand sculpture championships across the world.