New York, USA -- Zen Buddhism is not merely emptiness, "no mind," and koans. Among other things, it maintains a robust tradition of figure painting, a tradition magnificently celebrated by "Awakenings: Zen Figure Painting in Medieval Japan," a new exhibition at the Japan Society. The show comprises 47 Japanese (Zen) and Chinese (Chan) scroll paintings and painted sliding doors, including some work that has never before left Japan. 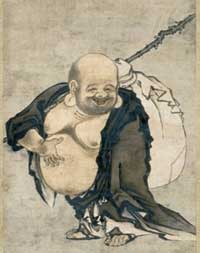 Scroll paintings of the Zen pantheon — the Buddha Sakyamuni (the historical Buddha), certain bodhisattvas, Bodhidharma (the First Patriarch), and others — were key tools for transmitting and enacting the religion as it spread east. Other types of paintings included here, such as those of charismatic or legendary figures, served the devotional life of the monastery, providing visual exemplars of Zen practice.

Of course, Zen Buddhism originated not in Japan but in China; the Chinese paintings in the show were brought to Japan during the medieval period. Because of later political repression in China, many Zen artifacts were preserved only by being housed in Japan.

Indeed, the first work a visitor encounters, "Sakyamuni Descending the Mountain" (1244), by an anonymous artist of the Southern Song dynasty, comes from China. It depicts Sakyamuni walking down from the mountain upon which he has spent six years in the austere pursuit of "awakening." As with many of the scrolls, the image is accompanied by a brief inscription. Barefoot, bearded, and clad in spiky, windswept robes, Sakyamuni is delicately rendered in pale black-ink brush strokes accented — in the face and feet — with darker and more precise lines.

Yet, as the engrossing catalog reminds us, despite its beauty, the painting was not created as an artwork in the Western sense: We tend "to exclude the ritual, even magical functions of visual images within Chan/Zen religious communities." These works are objects of devotion, and also a means of presenting and perpetuating the religious lineage of the Zen tradition.

Sakyamuni passed along his teachings through a chain of 28 Indian patriarchs, the last of whom, Bodhidharma, traveled to China, where he transmitted the teachings to the first of six Chinese patriarchs. So, on various scrolls we see Bodhidharma before a wall where he meditated for nine years and, on one remarkable 14th-century

Japanese scroll, crossing the Yangzi River on a reed. In the latter, painted on silk, red robes whip across Bodhidarma's corpulent body as he stands on his reed in blue water. Surrounded by a gold halo, or nimbus, his bald and bearded head and mossy brows turn with a defiant expression to look over his shoulder.

These visual hagiographies are not limited solely to patriarchs. Chan/Zen narratives also absorbed local fables and legendary figures. Among those who stood outside the patriarchal succession but were nevertheless venerated were the sansheng, uncommitted sages, of whom Budai (Hotei in Japanese), "a marauding priest of the street," is a notable example.

Budai tends to appear as a smiling vagabond, as in the whimsical scroll called "Hotei" from the Japanese Muromachi period. Here the sage laughs with squinting eyes and a pink-lipped open mouth. Each strand of his sparse hair and beard is visible, as is the naturalistic hair sprouting from his round belly and pudgy wrists. The fine detail of his face and body contrast with the broadly described white sack on his shoulder and the brown robes he wears.

One meets a number of these eccentric monks in this textured panoply. A vigorous Chinese ink drawing, for instance, portrays "The Shrimp Eater" (c. 1254–1256), a monk with hiked robes and a bamboo fishing net holding a shrimp by its legs, who is venerated despite ignoring the Buddhist prohibition against killing sentient beings.

Although one finds both monochromatic and multicolored paintings throughout the exhibition, three colored works on silk from 12th-century China, all by Lin Tinggui and Zhou Jichang, are among the most exquisite. They are so opulent and sensuous that one is surprised that they are part of the Zen tradition. Yet each relates to the luohan, awakened disciples of Buddha who exist in this world to protect the dharma (teachings).

Four monks in different styles of robes — pink, green, and blue; beige with brown boarders over green and blue — precede a staff-bearing luohan in "Pilgrims Offering Treasures to Luohan." Below them in the fantastic, mountainous, and vapor-engulfed landscape, a turbaned pilgrim on a camel led by a red-robed figure holds out a plate of coral as an offering.

Still, even in such a wild tableau, the attention to distinct physical traits stands out. It would seem that, unlike their counterparts in the West, medieval Zen figure painters sought verisimilitude and, though their works were highly stylized, took pains to render individuals distinctly. One need only look at the sad-faced "Portrait of Mokuan Shuyu" to get a sense of the personality of this Japanese monk.

And so it is with the entire exhibition. Medieval Zen and its art are enormously complex. However, this show provides informative bold strokes to follow, and then fills them in with gorgeous detail. Like the peripatetic Buddhist saints, these works have traveled widely to convey the dharma. You will delight in awakening to it.