A fresh look at Buddhist themes

Colombo, Sri Lanka -- As a tiny tot, Shantha K. Herath would pick up a piece of chalk and draw on the bottom half of the doors of his house. Later he would climb on a chair and draw on the top half. 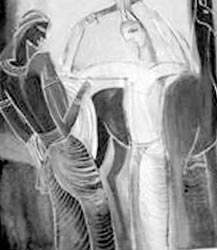 When he realised the height was not enough, he would take the risk of climbing on to the top of the chair and reach the top of the door. His home folk considered him a nuisance, because he was spoiling the doors. However, his childhood interest has taken him far and today he is an accomplished painter.

Hailing from Medawala, close to Kandy, Herath was attracted to temple paintings from his young days. The Medawala Tanpita Viharaya was his village temple.

He was fascinated by the work of the Kandyan artists. His interest in art made him study the paintings closely. In recent years Herath has been busy researching on how temple paintings would have progressed from the time of the Kandyan painters taking into account modern trends in painting. In the Kandyan era the accent was either on episodes from the Buddha's life or Jataka stories. Colourful paintings adorned temple walls.

"Today the styles have changed and much progress has been made," says Herath. He believes the painters should try to give their own interpretations to the themes they select rather than merely record an incident from the life of the Buddha or relate a Jataka story.

Herath has done a series of paintings based on this new concept. The themes vary. The paintings portray his interpretation of popular Buddhist themes. These include renunciation, the defeat of Mara and the arrival of Buddhism. Herath has preferred to use pastel shades which are pleasing to the eye and suit the themes well.

His first set of paintings is being exhibited at the latest bookshop in town, 'Kiyavana Nuvana' in Nugegoda. They are part of an exhibition of books on Buddhism which is being held as a special promotional event during the months of Vesak and Poson.

The collection of books is impressive. They are works by renowned scholars - both laity and clergy. They range from various aspects of the Dhamma to publications on Buddhist places of worship and other historical subjects. There is also a selected collection of CDs and audio cassettes.

The exhibition continues throughout the Poson month ending on June 29 and special discounts are being offered.

What: Art exbition by Shantha K. Herath
Where:  'Kiyavana Nuvana' bookshop in Nugegoda, Sri Lanka
When: Till June 29, 2007