Seoul, South Korea -- The National Museum of Korea is holding a special exhibition, titled ``Sutra Painting: In Search of Buddhahood'' at the Special Exhibition Gallery until Sept. 16.

Sutra paintings are referred to as the Buddhist scriptures, as depicted in its various handwritings and paintings.

Just as Buddhist paintings, with their delicate and elaborate illustrations, are highly respected, Goryeo's works are too revered.

The museum's exhibition is the first of its kind in Korea, featuring over a hundred sutra paintings. The works are considered to be national treasures.

The paintings have attracted public interest as they reveal the aesthetics of the Goryeo Kingdom (918~1392).

The show is made available, under limited viewing, to the public and scholars to ensure preservation.

The exhibition provides a rare opportunity to witness the collection of the sutra paintings from the National Museum, private museums, galleries, and even from private collections.

The exhibition features more than 40 objects, each produced during the Goryeo period that were brought in from Japan's National Museum and various temples for this exhibition.

Among these collections, 14 pieces will be on display for the first time in Korea.

The exhibition includes 26 designated objects, such as 7 National Treasures including National Treasure No.196, ``Flower Garland Sutra,'' from the collection of the Leeum Museum, 17 treasures and two Important Cultural Properties of Japan.

Also, this is the first time the ``Lotus Sutra Painting,'' patronized by Yeom Seung-ik, and discovered in Namgyewon pagoda, on display

The exhibition consists of two themes. The first highlights the Diamond Sutra Block made of gold found in Iksan Wanggung-ri pagoda, Buddhist reliquary as well as objects such as sutra case, sutra chest, and cloth for wrapping sutra. 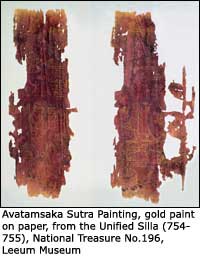 The second offers the sutra paintings ranging from the period of Unified Silla (668-935) to the Joseon Kingdom (1392-1910) arranged chronologically to present an entire view of the distinguishing characteristics in accordance with its period and style.

Also, the sutra paintings of China and Japan are on display to show the superiority of Korea's craft.

This exhibition provides visitors with an invaluable opportunity to appreciate the precious sutra paintings of Korea, cloth for wrapping sutra, as well as the pagodas and incense burner expressed in the sutra paintings.

``Through the delicate and flamboyant paintings, we can see how the world-top metal topography technology peaked in the Goryeo Kingdom which adopted Buddhism as the national religion,'' Kim Hong-nam, the museum's director, said.

It will reveal the noble spirituality of the ancestors and the sublime realm of Buddhism, she said.

``Avatamsaka Sutra Painting,'' which uses gold paint on paper from Unified Silla (754-755), is a sutra painting of the ``Newly Translated Avatamsaka Sutra,'' which was translated by the monk of Tang Dynasty, Siksananda (652-710).

``Mah ratnak'' is a sutra painting, painted with gold and silver on dark-blue paper in Goryeo (1006) which comes from the Kyoto National Museum.

``Amoghapasa-kalparaja Sutra Painting,'' gold paint on dark-blue paper, from the Goryeo era (1275) is on display from the Leeum Museum.