Beijing, China -- Tshatsha, a literal translation from a Sanskrit word which mean "copy" in English, stands for small clay sculptures cut from a mold, including mini-statues of Buddha, stupas or Buddhist scriptures. 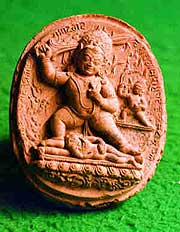 Usually, they are put inside large stupas or special shrines (tsha-kang). They can also be found on top of Mani stones flanked by prayer flags along tracks, on the revered snow-peaks or in sacred caves. The Tibetans carry them in small amulet boxes to guard against evil.

Tshatshas are believed to have come from India together with Buddhism. Although most tshatshas are made of clay, there are also wooden or stone ones. The former are used to fill the stupas, with some are placed on top of the Mani stones or in special shrines, while most of the latter are placed in Buddhist shrines or altars.

Tshatshas, whether ancient or modern, generally fall into two categories in terms of their forms: relief sculptures,including high and low reliefs, made with a one-sided mold; and round sculptures that are made with a double- sided mold.

To make a tshatsha, first a mold, an indispensable item known as tsha-shi-gong in Tibetan, has to be made. Most molds are made of bronze or brass, and those made of porcelain, paper, or wood are rare and hence especially precious.

Once the mold is made, one can begin to make a clay tshatsha, a process that has been compared to working with the popular children's toy of plasticene (named after the famous trademark).

First step, a lump of clay is stuffed into the mold after being rolled into a clay pie. Then, a pit is made within whichseveral grains of the highland barley (grown in Tibet and Qinghai in West China) are placed. The process, known as filling the scripture (Zhuangzang in Chinese), is believed to be able to give superhuman strength to the clay sculptures. Next, the clay is pressed so that its surface will be smooth and the design pattern clear. A pedestal is modeled by hand in the third step.

When all the above is done, the moist clay tshatsha is taken out from the mold and placed in sunshine to dry off, completing the process. This is called the lost wax method, which was considered the most advanced technique more than a millennium ago. It is still in use today to make delicate modern sculptures and replicas of antiques.