Tokyo, Japan -- For a subject in which words are considered an impediment to meditative insight, it is daunting just how many words are needed to explain Zen. It uncannily dodges any attempt at definition, and at least some exposure to the practice seems necessary before embarking on any worthwhile discussion of the subject. 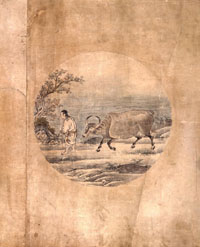 << Four ink paintings from a set of 10 attributed to Tenshu Shubun (1414-63) illustrate the Zen pursuit of a state of "no mind" with a parable about a young boy taming a water buffalo. IMAGES COURTESY OF TOKYO NATIONAL MUSEUM

Nonetheless, it is hard to imagine anything that has had a more profound influence on Japanese culture than Zen, apart from the natural world before the modern period. This is evident everywhere — in martial arts, tea ceremony, flower-arranging, Japanese architecture, garden design, noh drama — even in the scrubbed wood and clean lines of a sushi restaurant or the dancing calligraphy on its matchboxes.

Zen is also a "way," like those cultural pursuits, in which practice and experience are far more valuable than a manual. A Buddhist concept imported in the 13th century from China, Zen espouses spiritual enlightenment through meditation and other contemplative practices, and the realization of truth through intuition rather than intellect. We can see parallels in the otherwise inexplicable psychological processes of artistic creation.

After meeting brief hostility from entrenched sects of esoteric Buddhism when it was first imported, Zen attracted the support of military rulers. The five temples, modeled after a Song Dynasty (960-1279) system in China, were established in Kyoto to promote the new sect of Buddhism. Ranking above these five temples was the huge Nanzenji Temple, which enjoyed Imperial support, and below them was an extensive network of subsidiary temples spread throughout the country.

The Gozan temples functioned as de facto ministries for the dissemination of government directions and the monitoring of regional conditions, continuing the Chinese system on which they were modeled. Thus military rulers were able to promulgate control under a religious cloak, while high-ranking clerics — especially those with experience in China — took on government-service roles as translators, diplomats and advisers on foreign affairs. Mixing easily with the political and cultural elite, and well-supported by them financially, such clerics soon assumed a more secular, courtly style, living in palatial quarters and wearing silk robes, with the leisure to cultivate gentlemanly skills of social entertaining, painting and poetry. Buddhism and iconographic similarities with Song Dynasty culture. The temples served as repositories of art treasures brought back by monks who had studied Zen in China. These paintings, sculptures and ceramics were held in similar high regard to foreign brand-name luxuries today and were avidly collected, studied and imitated.

Chinese subjects such as celebrated sites of natural beauty and figures from religious legend and history entered the artistic repertoire, so that many Japanese paintings show inspiration from the mainland even up to the modern period.

Kamakura Period (1192-1333) Zen art is characterized by portrait paintings and sculptures of leading temple clerics. The sculptures are super-realistic — this was, after all, the golden age of religious sculpture in Japan — with inlaid crystal eyes that seem to follow every move. Almost without exception they are armed with a flat stick (keisaku), ever ready to give a salutary and reviving whack on the shoulders of monks who show signs of flagging diligence during meditation sessions.

Those practicing Zen meditation are told to sit and think about nothing — far easier said than done — an achievement likened to the efforts of a young boy taming a water buffalo. A set of 10 ink paintings attributed to Tenshu Shubun (1414-63) show the stages of capturing the gentle but wayward beast, ending with the boy in total control, seated on its back, playing a flute — an analogy to the calmed state of mind, thinking about nothing, but intuitively alert.

The exhibition provides a chance to see well-known but rarely displayed National Treasures familiar to students of Japanese art history. A famous pair of scroll-paintings of a scowling dragon and grumpy tiger attributed to Mokkei (or Mu Qi in Chinese) from Daitokuji Temple are shown, as is his landscape "River and Sky in Evening Snow" from Rokuonji Temple, which captures atmosphere in much the same way as the later English painter Joseph Mallord William Turner (1775-1851) did.

Landscapes were a common theme for Zen priest-painters from the 14th to the 16th century. Color was used sparingly, if at all, and ink was the favored medium used to capture feeling and atmosphere. With the phrase "the colors of ink," Japanese describe how, in the hands of a master, ink tones can suggest the flamboyance of fall or the hues of spring blossoms more effectively than mere pigments. They depict towering mountains, placid lakes punctuated by a boat and a lonely fisherman, gnarled pine trees and a hermitage retreat for a lucky Zen monk, dwarfed by the magnificence of nature. These artists knew nothing of the vanishing point in perspective, but captured distance by using fading ink tones, and leaving blank space to suggest mist and vastness.

The smaller hanging scrolls are haunting and evocative, and seem to provide portals to another, idyllic world — all the more poignant when we consider the wars and ever-present insecurity of the time when they were painted. Perhaps the feeling of Zen can be felt most in haboku (broken ink) landscapes that are almost abstract. A few hasty brush strokes of ink in various intensities suggest a sheer cliff, withered trees, a rustic roof in an infinity of space and diffused light — so seemingly simple and yet so difficult to accomplish. 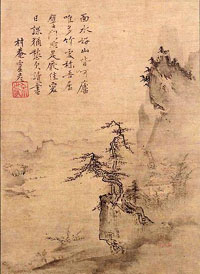 Perhaps the most famous example is a landscape painting by Sesshu Toyo (1420-1506) with inscriptions by the monk Getto Shukyo and five others, now a National Treasure in the Tokyo National Museum. Almost completely abstract, this painting feels strangely modern and, in another format, would not look out of place in a modern gallery. This is truly an example of painting with "no mind," where the brush-hand works as a direct extension of expression without the interference of thought.

A full-color catalog accompanies the exhibition, containing an informative essay by Asami Ryusuke in an excellent and clear English translation. Almost nothing of note about Zen has appeared in English since Suzuki Daisetsu's (1870-1966) "Zen and Japanese Culture" (1959) and Hisamatsu Shin'ichi's (1889-1980) "Zen and the Fine Arts" (1971). Asami gently points out the slightly opinionated, though well-argued direction of these books and adds much new insight in light of recent scholarship into how Zen established itself within Japan's military power structure.

In their time, both Suzuki and Hisamatsu purported that certain aesthetic characteristics, such as asymmetry, simplicity, otherworldliness and subtle profundity, are evidence of Zen in works of art. But Asami points out that such sensitivity existed long before the arrival of Zen, and can be seen in earlier poetry such as a one-verse waka poem by Fujiwara Sadaie (1162-1241):

My hut by the water in the autumn twilight — wherever I look, neither blossoms nor autumn leaves . . . Note how the verse conjures a monotone image without a trace of the expected exuberant colors of the season, and suggests the restrained atmosphere and sensitivity that we associate with the works of later Zen monks. With such observations, this is a fascinating and scholarly new appraisal of Zen art that is highly recommended for all with serious interest in this profound culture.