From Tibet, Art of Enlightenment

New York, USA -- What is art for? What should it be for? What can it be for? Ask today’s art world these questions, and you’ll get a discordant babel of answers. So it is useful to check in on times and places that were not so conflicted. Consider, for example, the art of Bon, the centuries-old indigenous religion of Tibet, presented in a beautiful exhibition at the Rubin Museum of Art. The purpose of Bon art was, unequivocally, to help achieve spiritual enlightenment. 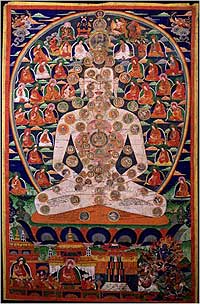 << A work on cloth from 18th- or 19th-century Tibet shows the use of peaceful and wrathful deities.

The exhibition’s easel-size paintings and few small sculptures of metal and wood, made by anonymous artisans from the 12th to the early 20th century, depict a bewildering array of deities, demons, sages, holy places and mythic narratives similar to those of Hindu and Buddhist art. (As Buddhism took hold in Tibet, it cross-pollinated with Bon.) The Western nonspecialist can learn some of the basic history and vocabulary of Bon art from wall labels. But it’s exhausting to try to sort out and retain the seemingly innumerable names and stories; it’s easier to fall back on Western viewing habits, to see Bon paintings in terms of form, craft and fanciful imagery.

It’s easy too because the paintings are so visually enthralling. Made with fine brushes and colored pigments on unstretched rectangles of fabric, Bon paintings typically are rigidly symmetrical, grid-based compositions with large central figures surrounded by dozens and in some cases hundreds of smaller ones.

Serene, Buddha-type figures seated on lotus-flower thrones preside over many paintings. Others portray so-called wrathful deities: muscular, blue-skinned monsters with multiple heads, arms and eyes who stomp on small humans and demons while grasping to their chests half-naked female consorts who appear to be in states of sexual ecstasy. (Though they are scary to behold, wrathful deities are not evil; their ferocity is directed at enemies of Bon.)

Drawing in for close study, you discover details rendered with eye-straining miniaturism: jewelry, plants, animals and domestic objects as well as intricate decorative patterns. The Bon art in this show displays little of the realism of Persian and Indian miniatures, but it is similar in its drive to activate every square centimeter of the picture.

One set of paintings from the 18th or 19th centuries is unusually marked by nonsymmetrical, nonhierarchical compositions. Painted with an exacting yet soft touch, they depict scenes from the life of Bon’s founder, Tonpa Shenrab, set in verdant pastoral landscapes punctuated by orange and red buildings. The tapestrylike pictures have a sweetly personal poetry unlike the more anonymously stylized look of the exhibition’s other works.

Even if you know little about Bon art and religion it will be obvious that Bon paintings are not just for entertainment or aesthetic delectation. What may be less clear is that they are based on an elaborate system of meditative practices intended to lead to psychic liberation from the continual pains, pleasures, desires and frustrations of human existence.

The program entails submission to an enlightened teacher and active effort on the part of the student through reciting prayers and visualizing during meditation. Unlike certain forms of Christianity that say that if you simply surrender to Jesus you will be saved, Bon requires rigorous training; it’s a workout regimen for the soul.

“Opening the Door to Bon” by Nyima Dakpa, a paperback available in the Rubin’s gift shop, gives basic instructions, like visualizing Shen Lha Okar, the Buddha of Compassion, on a lotus throne with sun and moon cushions:

“On Shen Lha Okar’s right side are flames of fire and gusts of wind. The retinue of peaceful and wrathful deities stands in these gusts and flames. They wear ornaments made of bone. Each deity holds weapons. They stand in wrathful postures. Above and behind these deities are the 1,002 enlightened ones, dressed in monks’ robes. They are all perfected with the 32 major signs of the enlightened ones and 81 exemplary signs. They all sit cross-legged in the meditation position. They emanate limitless lights and rays and are surrounded by rainbows.”

Sounds a lot like a description of a Bon painting, doesn’t it?

Meditative visualization entails more than just fantastic imagery. Mr. Dakpa’s guide also directs the seeker to meditate on the meaning of the signs and symbols that he visualizes as well as on the feelings that they arouse, which should eventually include magnanimity toward all living creatures and toward all of existence.

It may be hard to imagine anything like Bon art flourishing in a skeptical modern world ruled by consumerism and narcissism, but it is good to have it as an inspirational model of what art can be and do.