Breaking through the Cocoon

Beijing, China -- Lotus Chen, the contemporary Chinese artist, completed four new works in 2007. These include The Angry Image of Budhisattva, To Be or Not to Be and Accompanying Through Death, all of which are based on her life experiences in Tibet. She held a personal large-scale art exhibition named "My Ten Years" in Tibet in November 2005. Like a silkworm, she has broken through a cocoon and turned into a moth. 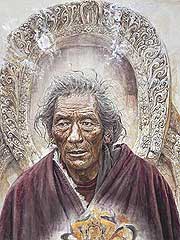 The Angry Image of Budhisattva features a Tibetan child caught in a snowstorm. In order to escape the cold, the boy hides on a cliff side carved with the Buddhist figure, Mahagala. The background picture is derived from the wall paintings of Tshur-phu Monastery in Lhasa. The two-armed Mahagala is the embodiment of the deity of ferocious-looking Sakyamuni Buddha in Tibetan culture. He holds a machete in the right hand and a bowl in his left. The warmth of justice drives the chilliness out of the cave. The boy stays safe under his protection. Snowflakes will never fall on the child's body, despite the severely cold weather.

Tibetan Buddhists believe in the power and mercy of Mahagala, who gives them mighty power to fight trials and tribulations and overcome the devil. Therefore, the child still looks happy and confident, even in a state of deadly cold.

To be or Not to Be is a simple sentence, but has deep meaning. The figure of a middle-aged Tibetan man, whose body is like the Eiffel Tower, occupies almost the whole painting. The legendary dancing goddess on his chest is the first woman, named Xi, derived from an ancient fresco of a monastery named mTho-lding-dgon-pa, in Gu-ge district. Embraced by a baby, Xi stamps on a dragon representing fortune.

The picture indicates everything a man could want -- woman, child and career. The background drawing is a nimbus, made of mud, of The Future Buddha during the Gu-ge Kingdom period. Over thousands of years the nimbus experiences constant polishing. After the bSang ritual, smoke coils up in front of nimbus, which is the symbol of the circle of existence.

The man is pondering against the background of a vacant nimbus. Unkempt hair and rough skin reveals hardship in his life. His eyes reveal wisdom and anxiety. The painting reflects the artist's desire to pursue the lofty realm of thought in life.

"Nowadays everybody is struggling, but for what?" asks Chen. "Everybody is pursuing, but for what? Everybody is looking for safety, but where is Safety? We have too many options, but problems and anxiousness follow. Should fortune be kept or given to charity? Should we keep dignity or pursue a high standard of life? Should we keep our faith or drift with the tide? After thousands of years, we're still seeking the answer and haven't come to realize the truth.

"Therefore, we should not get too attached to whatever happens in the present, as all things will change continuously. I realized it after I spent 10 years in Tibet, after I went across remote mountains and holy lakes, fled from landslides... Finally I acquired, steadily and surely, a kind of feeling that is wisdom combined with art.'

Accompanying Through Death describes the journey of an old lady named Geji, from Khams-pa-dgon District, as she goes across death. Accompanied by her Buddhist protector, she goes across the dark of death to a bright renascence. There are numerous stars in the sky and twinkling lights in the distance. Guided by the Buddhist protector Geiwuchaji, the old lady takes leave of mortal life and walks peacefully and confidently during the journey. Snow falls on her ragged clothes, and she cannot help but turn around to see her home. Death cannot frighten her, but the lost sweetness of home makes her shed tears.

Geiwuchaji smiles and keeps his eyes open. His face is not beautiful, and can even be called ugly. The art of Tibetan Buddhism seldom decorates noble souls with beautiful appearances. On the contrary, dignity usually is frightening looking, like bones or blood, to hint that one should abandon the pursuit of "real" objects. Justice defeats evil with its ferocious looks and guides people to purify their souls.

After the traumatic car accident she was involved in, Lotus Chen began to cherish life and pay more attention to everyday occurrences. "Somebody asked me what I use in my paintings," she says seriously. "I use my life. Every person, every stone, dust, even every rumple of fur jacket has become an indelible sensation and memory in my mind, and merges into my work."

Lotus Chen surprises us constantly in her new work. Her new paintings are not only simple descriptions, but also her views on life. Her work has sublimeness, thanks to her freehand brushwork, and her consistent pursuit of wisdom. From child to adult, from life to death, every step contains plentiful emotion. Her struggle for truth in art is commendable. Because the value of art depends not just on technique, calligraphy or color, but on the extensive love of an artist giving life to her creations.