Los Angeles, USA -- Before demonstrating a dance recently at her family's Westside rehearsal studio, Mythili Prakash dropped to the floor in what looked a bit like ballet's first position grand plié and prostrated herself. Then she kissed the floor, in homage to both the studio and her mother, who was seated nearby. 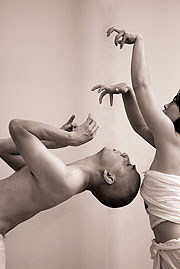 "This is 'Namaskar,' " she explained afterward, "when I offer my prayers to the Earth and surrender my ego."

For Prakash and her mother, Viji, who has long doubled as her guru, the South Indian classical dance idiom bharata natyam is first and foremost a spiritual practice. And that's what they hope to convey when they perform as part of this year's World Festival of Sacred Music, which will continue until Sept. 28 at venues throughout the city.

"The dance can have plenty of bling," said Prakash, 26. "But there's also a sixth-sense element to it. It's an extra something else you feel through the dance and the music that can take years to achieve."

That extra something might well be the watchword of the triennial festival, now in its fourth incarnation but still faithful to its original 1999 mission of advancing the Dalai Lama's call for millennial peace. Although only "music" is part of its name, many of this year's approximately 1,000 participants from around the globe are dancers and choreographers.

{GAD)In fact, dance has historically played an integral role in a number of the musical traditions that will be showcased during the festival. In those traditions, "the body as a means to understand the divine has been deeply investigated," says Judy Mitoma, the festival's director and a professor of dance studies at UCLA.

NEARLY half the 41 events will feature dance or informal movement, often presented in cross-cultural juxtaposition. Viji Prakash's Shakti Dance Company, for example, will share the stage with Hawaiian hula dancers.

In some cases, traditional and contemporary dance will intersect within a single performance, as in Hirokazu Kosaka's "Mare Serenitatis" (Sea of Tranquillity), an evening-length work celebrating the harvest moon and featuring Los Angeles butoh dancer Oguri, the modern dance company Body Traffic, classical Japanese court dancers and a group of Zen Buddhist archers.

Mitoma takes care to say "we are not trying to equate one [dance] with another, whether it's coming from an ancient tradition or a contemporary spiritualism. But I would say that all the work in the festival is an embodiment of the spiritual."

Unlike in much Western dance, however, "where musicians sometimes are relegated to the role of accompanist, there is a powerful interdependence between the music and the movement when it comes to the work in this festival," she says. "In many of these dance forms, you cannot have the movement without the sound, and the sound is incomplete without the movement."

In Afro-Brazilian dance, for instance, which originated in the Candomble religion of African slaves, the dance and the music "cannot be separated," says Linda Yudin, artistic director of the L.A.-based Viver Brasil, which will appear several times.

"In Brazil," Yudin says, "the Candomble devotees not only learn the dances, they learn the songs and how to drum the rhythms."

Called "Anatta," after a Buddhist concept of the illusoriness of the soul, the performance will feature interplay between Sirisook's and Sakamoto's movements, which stem from their respective training in northern Thai lanna dance and butoh, and an electronic, avant-garde soundscape. 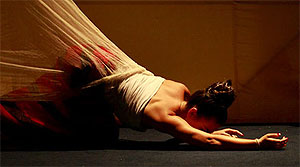 "We will all be working in semi-improvised structures, looking for the life of the moment, which jibes with the Buddhist concept of impermanence," says Sakamoto. "The musicians might see something in our movements that will inspire their sound, or vice versa."

A quest to sanctify the performing area to reveal a mission beyond individual expression is another element that unites many of the festival's movement artists. At the beginning of Kosaka's work, to be performed at the Aratani/Japan America Theatre, the archers will "purify the space."

"Vertical space is about ego, and horizontal space is about impermanence," says Kosaka, a visual artist, Buddhist priest and Zen archer. "I am interested in creating these bipolar oppositions of space, but first the space must be transformed."

For belly dancer Melanie Kareem, who will perform to Sephardic Jewish and Sufi music by the Stefani Valadez Ensemble, intent is what allows her to adapt Middle Eastern dance steps into movement appropriate for sacred environments.

"It is really about the expression on your face, your costuming and the integration of your intention with the movement," Kareem says. "When I teach, I always tell my students that their dance is a gift to the audience."

Sakamoto, for his part, observes that constantly aiming for "mind-body-spirit integration with as much humility, respect and humor as possible" allows him to find the sacred element in any performance.

"Most sacred art forms are traditional, ancient or folk-based rather than cutting-edge contemporary work," he says. "But I believe that contemporary practices can be just as deep and resonant."

Interpreting traditional forms through a contemporary sensibility is entirely acceptable to Yudin of Viver Brasil -- provided the performers "have a foundation in the tradition."

"It's important that our dancers and musicians know what they're dancing and playing before taking it to a contemporary context," she says. "Afro-Brazilian dance is not dance for dance's sake. These are movements that talk history, politics, race and economy."

Ultimately, though, Mitoma hopes that festival spectators will see dance not just "rooted in sacred intention" but also artistically accomplished.

"Any good ceremony or ritual is artistic," she says. "And these traditions have developed over time and been precisely calibrated to grab the attention of both the spectator and practitioner.

"If they didn't have a compelling aesthetic, then they wouldn't have survived."

The World Festival of Sacred Music is taking place at locations throughout Los Angeles until Sept. 28. For more information, visit www.festivalofsacredmusic.org.