Free as a bird

Amsterdam, Holland -- Namgyal Lhamo’s cross-cultural experiences and understanding of Tibetan performing arts have opened up new and varied musical spheres. The Nightingale of Tibet speaks to Mathures Paul about working with lounge musicians, opera and, of course, the issue of her country’s independence 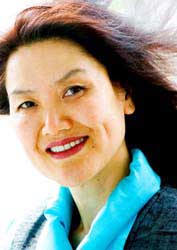 << Namgyal Lhamo (Photo: World Music Today)
Popularly known as the Nightingale of Tibet, Namgyal Lhamo is an exponent of avant-garde and classical Tibetan singing and opera. Through her albums she reaches people’s hearts and minds irrespective of their political leaning. Lhamo, through her music, tries to retain her Tibetan culture and identity. In an exclusive interview with The Statesman:

In 2007 you collaborated with Arnav Srivastava on The Enchanted Land. What were the challenges working with an electronic lounge musician?

This happened rather unexpectedly and it all went very quickly. I was a bit overwhelmed by the experience. But the song Changka won a prize. I definitely am interested to experiment further with crossover musicians. On the next occasion, I would like to spend more time in exploring the various avenues of working with different musical idioms.

You are working on an album for which you have collaborated with British rock musicians. The concept behind Highland Supernova...

Yes, the album will be released early 2009. Many Tibetan folksongs have in their own way a specific beat and melodious line that can be enhanced or accentuated for a modern audience when mixed with some basic rock elements. It will give an extra, and often a surprising, dimension to our Tibetan melodies and rhythms; in turn, I feel it adds a new element to Western music. This was the idea for Enchanted Land, which I am expanding further in Highland Supernova.

Moving back in time, what prompted you to join the Tibetan Institute of Performing Arts and about the education you received there?

I was selected from among a large number of Tibetan refugee children in Dharamsala to join TIPA at the age of ten. In those days, there was no television or movie theatres to visit. At home, my father often played one of his few Tibetan records in the evening and all the family members used to sit around the His Master’s Voice gramophone. My father would say: “OK, Namgyal!” And then I would perform. I remember I was so small I could barely stand up. Singing and dancing came naturally to me. In TIPA it all came together. Over the years, I noticed that on stage I still have that feeling of being ‘at home’ as if performing for my relatives.

TIPA was founded by His Holiness the Dalai Lama to preserve the Tibetan culture in exile. In TIPA we got a traditional Tibetan education and we were trained in the Tibetan opera, Tibetan folk dance, drama and music. All the performing arts were taught by the great teachers who had managed to escape from Tibet. We learned hundreds of songs, different techniques and styles from the various regions and historic periods of Tibet. It was very intensive. We started early in the morning and studied and trained until late evening. Before presenting an opera we often performed before His Holiness who would give us His blessings and some ‘last’ advice. In general he always stressed on the importance to finish our artistic training and then make our knowledge and skills available to the Tibetan community and audiences in India and abroad.

Nangma is what we call “the classical music of Tibet”. These songs are performed by an instrumental ensemble - flute, lute, two-stringed fiddle, the hammer dulcimer and bells. Probably in the 17th and 18th century this tradition of music and songs was introduced into Tibet by Tibetan Muslims. They introduced the lute and a musical idiom from Kashmir, Turkistan and maybe Persia and combined it with instruments that originated from China, such as the fiddle and dulcimer.

Toeshe is a more recent musical style, based on folk songs from Toe-pa (Western Tibet). All Toeshe songs have a rather slow and melodious first part and end with a lively tap dance.

Folk songs are often integrated with a dance, mostly by a group of men and women. Many songs are performed during specific chores - roof making, ploughing, sowing, harvesting etc. Tibetans like parties, and during festivities (weddings, religious festivals or New Year) we often have competitions. Also in singing. Groups face each other and sing songs to ‘flirt’, to speak about nature, life, love, friendship or religion through allusive metaphors.

The Lu is a style of singing from Amdo and Kham (Eastern Tibet). Typical mountain songs from the local nomadic culture. They have a specific ornamental melodious line that personally reminds me in some ways of the ghazal. Lu and opera require techniques that are different from classical and folk songs. They are very challenging in the way that they pose different demands on the voice, often with a rather high pitch and fast tempo.

What is the difference between European and Tibetan opera?

We call Tibetan opera Lhamo. Lhamo means ‘goddess’ or ‘fairy’. In each opera fairies play a role. A Tibetan Buddhist saint, Thangtong Gyalpo, founded in the 15th century the tradition of the Tibetan opera. The seven classical operas we know (only recently we started to write and perform new operas), all tell stories about our religious kings and queens. The operas are performed inside tents. The stage always has a small altar in the centre with a statue of Thangtong Gyalpo. There are many roles in the opera and there is always a storyteller who chants in a very fast rhythm. He presents the story and sets the scene as we do not use any backdrop on stage. Actors recite, sing, dance and act to interact with each other and the ‘choir of fairies’. The religious character, the dancing by the singers... set the Tibetan opera apart from the Western opera tradition. Another major difference is the orchestra. Western opera is performed by a philharmonic orchestra and singers on stage. Tibetan opera singers are mostly accompanied by drums and cymbals.

How difficult is it to keep your songwriting free of political discourse?

The few songs I have written so far are more inspired by personal experiences rather than by politics, though, of course, the context of being a Tibetan and living in exile always resonates in whatever I do.

Independence is a political issue. As an artiste we look at freedom of expression, we look at different ways to communicate. Both independence and meaningful autonomy would provide such conditions. Independence might look very attractive but it may also be less realistic in the present circumstances. As an artiste, I want to reach people’s hearts and minds irrespective of politics. But I want to also maintain our Tibetan culture and identity. If that cannot be realised through meaningful autonomy, we may have to ask for more.

Do you think India, in the recent past, has been maintaining a certain ambiguity and wants Tibet to engage in discussion with China?
This is again a political issue that is difficult to judge from where I live in Holland. With many Tibetans I have experienced the hospitality of the Indian government and I appreciate their generosity towards the Tibetan refugee community. Living in Europe, I know that not all governments welcome political or other refugees these days, especially when they come in such large numbers, as was the case of Tibetan refugees coming to India. So, in a way, I consider India my second Fatherland. And I also appreciate India’s geopolitical concerns when it comes to its position vis-a-vis China.

All Tibetan songs in one way or the other - as our culture in general - are influenced by Buddhism. Some songs praise our high lamas and Buddhist ancient saints, some songs have written by these spiritual masters and contain spiritual advice, for example, I have sung a Nangma song titled Amaleho, which is a poem by the Sixth Dalai Lama predicting where He would be reborn. But even in worldly songs we often refer to Buddhist values such as compassion, karma, non-violence and mindfulness. During our education in TIPA, we also had a rigorous religious training and many of the high lamas who were residing in Dharamsala often visited us.

Living in the Netherlands, how do you maintain connections with Tibetan musicians?
Many of my former colleagues of TIPA live abroad, some live in India. We have formed an informal network of friends and colleagues. The Internet is quite helpful. When TIPA or other Tibetan musicians visit the Netherlands, we meet. Whenever I am in India, I visit my teachers. Occasionally I perform in Dharamsala, like I did on His Holiness’ 40th anniversary of being the spiritual and temporal leader of Tibet.

A few years back you formed a music group called Gangchenpa.

I got the idea of Gangchenpa when Chukie Tethong, my sister who also is a singer, and I were in Argentina shooting for Seven Years in Tibet. There we met the Tibetan musician and singer Tobden Gyatso. During the three months we worked on the film, we often sang at parties. Once we performed for the film’s director, Jean-Jacques Annaud, Brad Pitt and the rest of the cast. Tobden plays the Amdo mandoline, I play lute and dulcimer. We all sing - mostly classical songs or folk songs from different parts of Tibet. As music today in Tibet is heavily influenced by mainstream Chinese sounds and in India many musicians are influenced by Indian music, we specialise in singing in the traditional style. After Argentina, we managed to tour together and record a CD: Voices from Tibet. Since we live on three different continents, it is difficult to perform often.