In search of Gandharan art

A new exhibition is drawing international attention to the syncretism of Hellenism and Buddhism in Pakistan's Gandharan art, writes David Tresilian

Paris, France -- Readers of British author Rudyard Kipling's novel Kim, set sometime towards the end of the 19th century in what was then British India, will remember the lama's visit to the Lahore Museum, now in Pakistan, of which Kipling's father was an early curator. 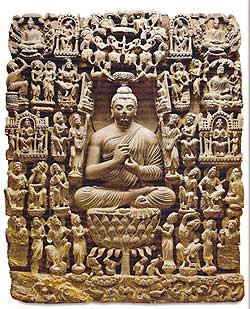 "In the entrance-hall stood the larger figures of the Greco-Buddhist sculptures done, savants know how long since, by forgotten workmen whose hands were feeling, and not unskilfully, for the mysteriously transmitted Grecian touch," Kipling writes of work that would today be described as Gandharan art after a former region of what is now north-western Pakistan.

"There were hundreds of pieces, friezes of figures in relief, fragments of statues and slabs crowded with figures that had encrusted the brick walls of the Buddhist stupas and viharas of the North Country and now, dug up and labelled, made the pride of the Museum. In open-mouthed wonder the lama turned to this and that, and finally checked in rapt attention before a large alto- relief representing a coronation or apotheosis of the Lord Buddha.

The Master was represented seated on a lotus the petals of which were so deeply undercut as to show almost detached. Round Him was an adoring hierarchy of kings, elders, and old-time Buddhas. Below were lotus-covered waters with fishes and water-birds. Two butterfly-winged devas held a wreath over His head; above them another pair supported an umbrella surmounted by the jewelled headdress of the Bodhisat.

'The Lord! The Lord! It is Sakya Muni himself,' the lama half sobbed; and under his breath began the wonderful Buddhist invocation: 'To Him the Way, the Law, apart, Whom Maya held beneath her heart, Ananda's Lord, the Bodhisat.'

It is material of this sort, much of it lent by the museum in Lahore, as well as by the Peshawar museum and the museums at the Gandharan sites of Taxila and Saidu Sharif in the Swat Valley, that has now been brought to Paris for an exhibition at the Musée Guimet. Entitled Pakistan -- terre de rencontre -- Ier-VIème siècles -- Les arts du Gandhara and running until mid August, the exhibition presents the Graeco-Buddhist art that developed in what is now Pakistan and Afghanistan following the arrival of Alexander the Great in the region in the fourth century BCE and the spread of Buddhism.

Images of the Buddha wearing Hellenistic-style drapery and of bare-chested, Indian-style bodhisattvas, or helping spirits, are typical of Gandharan art, which brought together the figurative traditions of Greek sculpture with Indian, Iranian and Central Asian artistic traditions and Buddhism. Many people may have had their first inkling that Pakistan and Afghanistan were the birthplace of this form of art, an essential stepping stone in the worldwide spread of Buddhism, from the destruction by the Taliban regime in Afghanistan of the gigantic statues of the Buddha at Bamiyan in 2001, causing huge loss to world cultural memory.

However, even before Taliban rule successive regimes in Afghanistan had either permitted or encouraged the looting of Hellenistic and Buddhist sites throughout that country, also destroying or dispersing the collections of the National Museum of Afghanistan in Kabul. For this reason alone, the Paris exhibition is particularly welcome as it draws international attention to the threats that such materials have faced, at least in Afghanistan.

It is also welcome because of the fascinating and unusual story that it tells, which is one of the meeting of eastern and western forms of art and the development of Buddhist iconography from a basis in Hellenism. This process, still argued over and perhaps not fully understood, is one that might be thought to hold particular lessons for today's globalising world, and it also adds to the Indian subcontinent's role as the birthplace or meeting point of many world religions and civilisations, from Hellenism and Buddhism to, centuries later, Hinduism, Buddhism and Islam.

According to curator Pierre Cambon writing in the catalogue accompanying the exhibition, it was British archaeologists working with the Archaeological Survey of India at the end of the 19th century who first began systematically to excavate the Buddhist stupas and sites of long- abandoned monasteries that dot north-western Pakistan.

In doing so, they turned up previously unknown forms of Graeco-Buddhist sculpture, once used for religious purposes in the region's Buddhist monasteries, along with coins and other materials bearing the names of long-forgotten Hellenistic kings, the successors of the Greek generals installed by Alexander the Great as the rulers of this region of what is now Pakistan and Afghanistan, once the eastern satrapies of the Persian empire.

Cambon also writes that it was a French archaeologist, Alfred Foucher, who developed the idea that the Graeco-Buddhist materials he had excavated at Peshawar near what is now the border with Afghanistan bore witness to "the Greek origin of the image of the Buddha."

The results of this encounter are on show in the Paris exhibition, where reliefs illustrating episodes in the life of the Buddha are on show, for the first time setting out the familiar sequence of birth, enlightenment, teaching and death and drawing on "narrative scenes developed within the Mediterranean world, like those used on Roman sarcophaguses."

Of the various demon or god-like figures incorporated into the Buddhist pantheon, Pancika and Hariti, the one associated with wealth and fecundity, the other originally a terrible ogress and devourer of children, are represented in iconography borrowed from Hercules and Athena. Images of Vajrapani, a companion of the Buddha, typically show him wearing the lion headgear associated with Alexander the Great in Hellenistic statuary or as being modeled on Hercules.

Such a juxtaposition of elements taken from different cultures "is characteristic of Gandharan art," Cambon writes, "which places different styles side by side, allowing them to coexist in a highly intelligent way while retaining their fidelity to the original models." Commenting on the earliest known images of the Buddha found at Swat and Taxila and dating to the first few centuries CE, Cambon writes that these are bathed in a deliberately foreign atmosphere, the Buddha sitting within architectural structures supported by Corinthian columns, for example, or idealized in typically Gandharan fashion and being "half way between an Indian sage and an Apollonian Indo-Greek prince."

Among the major pieces on show is a relief of the Buddha sitting on a lotus and making the gesture of teaching, the dharma, while surrounded by an assembly of divine figures and bodhisattvas. Lent by the Lahore Museum and dating from the 5th or 6th centuries CE, this seems to be the sculpture that so impressed the ancient lama, Kim's companion, in Kipling's novel.

Cambon comments that the mass of figures surrounding the image of the Buddha in this piece associates it with the later images found at the Dunhuang caves in Chinese Central Asia, showing that the style of these originates in Gandhara. Buddhism, moving upwards and eastwards along the ancient Silk Roads trading routes that once criss-crossed Central Asia, found fertile new territories in East and Southeast Asia far from the religion's origins in northern India.

This image of the apotheosis of the Buddha, Cambon comments, "with his jewel-encrusted parasol and surrounded by laurel-crowned cherubs," so similar to the images found at Dunhuang, "owes much to a Mediterranean and Near Eastern repertoire."

Other pieces in the exhibition include the so- called "Athena of Lahore," part of what seems to be a statue of the ancient Greek goddess of unknown provenance, but presumably made in one of the region's ancient Hellenistic kingdoms. There are also multiple examples of statues of the Buddha and of bodhisattvas, perhaps showing a trend away from a naturalistic conception in the Buddha's case and towards a more idealized image, possibly drawing on the idealized faces characteristic of Greek and Hellenistic sculpture.

One of the most astonishing pieces in the show, an image of the fasting Buddha found at Jamalgarhi in Pakistan and dating from the 4th or 5th centuries CE, shows the Buddha gaunt and hollowed out from religious fasting. According to Cambon, the hyper-realism of this ascetic Buddha also expresses "an original form of symbiosis between India and Greece."

Among the wall texts included in the exhibition is a fragment from a dialogue between the Indo- Greek king Menander, one of the inheritors of Alexander the Great's incursion into the region, and the Indian sage Nagasena that presumably dates to Menander's reign in the second century BCE.

Part of a long work, the Milinda Panha, or Questions of King Milinda, in which Milanda / Menander poses questions to Nagasena on philosophical, religious and ethical issues, the exhibition text presents the two men discussing the relationship between being and nothingness, the sage characteristically explaining his answers by reference to elaborate analogies.

The text aptly illustrates the idea of dialogue between Hellenism and Buddhism, one of the themes of the exhibition, as does the larger work from which it comes. To see that dialogue worked out in fuller terms one would need to visit the relevant sites and museums in north-western Pakistan, not necessarily an easy trip to make at present, with Peshawar and the Swat Valley currently advertised as being off limits to certain foreign visitors.

Just a few years ago things were different, and I can well remember driving across the plains from Islamabad to see this material in situ in the museums at Taxila and Peshawar. At the moment, however, perhaps few international visitors will plan to visit Peshawar, and that being so the organisers of the present exhibition, the Kunst und Ausstellungshalle der Bundesrepublik Deutschland, the Musée Guimet, the Pakistan museum authorities and the government of Pakistan, are particularly to be congratulated on arranging for its European tour to Berlin and Zurich as well as to Paris.

Sensitively displayed, the 200 or so pieces included in the exhibition, drawn in the main from the museums in Lahore, Taxila, Peshawar and Saidu Sharif, are all too rarely seen outside Pakistan. Seen together they cast fascinating light not only on that country's long and varied history, itself not always widely appreciated outside Pakistan's borders, but also on the development and worldwide spread of Buddhism.