New York, USA -- The Buddhist influence on art of the past 50 years is, like much else in the Buddhist worldview, immeasurable. “Grain of Emptiness: Buddhism-Inspired Contemporary Art,” at the Rubin Museum of Art, wisely doesn’t attempt such a survey. Instead it offers up an eclectic, not-the-usual-suspects group of five artists: Sanford Biggers, Theaster Gates, Atta Kim, Wolfgang Laib and Charmion von Wiegand. 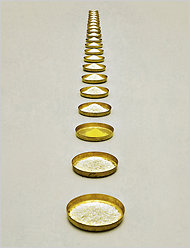 It may be a stretch to call Ms. von Wiegand (1896-1983) a “contemporary” artist, but never mind; her colorful abstract paintings from the 1950s and ’60s are revelatory and relevant. And in any case this show takes the long view, interspersing the recent art with Himalayan works that date from the 12th through 19th centuries.

None of the five artists consider themselves Buddhists, but they all lean heavily on the religion’s symbols, tenets and rituals. As implied by the show’s puzzler of a title, the concept of emptiness, or “shunyata” in Sanskrit, is particularly important to them.

That word requires some clarification, because non-Buddhists will be tempted to interpret it as “nothingness.” In Buddhism “emptiness” refers to the interdependence of all phenomena. To put it simply, reality as we know it is an illusion because nothing can exist on its own.

It’s also important, for this show’s purposes, to distance emptiness and the void from some of their formalist associations. With few exceptions, pared-down imagery has little place in the works at the Rubin. The museum’s chief curator, Martin Brauen, who organized the show, writes in his catalog essay that “fullness of form, as manifested for example in a mandala, is emptiness, and emptiness is this fullness of form.”

Ms. von Wiegand’s paintings, for instance, are extravagantly full: of colors, symbols and spiritual directives. This artist, a friend of Piet Mondrian’s who shared his interests in theosophy and neoplasticism, came to know Tibetan Buddhism relatively late in life. In the 1960s, while studying with the Tibetan guru Khyongla Rato, she started to incorporate mandalas, chakras and other Buddhist symbols into her abstract compositions.

At the Rubin you can compare the triangular designs in Ms. von Wiegand’s “Chakras” (1958-68) with those in a 17th-century bronze Nepalese yantra, a decorative object used to bring focus to the mind. The painting’s frenetic channels of multicolored squares, meanwhile, will have you meditating on Mondrian’s “Boogie Woogies.”

Mr. Biggers also appropriates Buddhist symbolism in “Lotus” (2007), an enormous glass flower that hangs over the museum’s spiral staircase. On its petals he has hand-etched rows of paper-doll-like figures, based on diagrams of slave-ship holds. In another place “Lotus” might evoke suffering and transcendence, but the Rubin’s plush, decorous setting makes it look benignly ornamental.

In contrast, Mr. Kim’s photographs articulate Buddhist thoughts without doing much in the way of art. His long-exposure photographs of hectic urban streets blur foot and car traffic while retaining architecture, an idea that’s as old as Daguerre. And his digitally layered “portraits,” which collapse hundreds of facial images into archetypal Tibetan men and women, make the idea of selflessness almost too accessible.

The singers shown in close-up in Mr. Gates’s video “Breathing” (2010) flow from Japanese mantras into African-American spirituals. All are members of Mr. Gates’s Buddhist/gospel chorus, the Black Monks of Mississippi, which he has been directing since 2008. Their cross-cultural chants fill the galleries, adding to, rather than distracting from, the other works. Performance also figures in the sculptures of Mr. Laib, which combine Minimalist forms with Buddhist rituals. “Rice Meals,” for instance, involves a row of brass plates holding small mountains of uncooked rice and hazelnut pollen.

During the show’s installation Mr. Laib was a monkish presence, sitting shoeless on the gallery floor as he spooned the pollen from a jar. “If you’re not careful, the pollen is sliding down like lava from a volcano, and you have to start all over again,” he told the museum crew.

The setup of his latest “Milkstone” (2010), a slightly hollowed white marble slab covered with a thin film of milk, was just as exacting. After pouring milk from a small ceramic pitcher onto the center of the stone, Mr. Laib used a moistened fingertip to drag the liquid out to the corners.

The whole process, which will be repeated daily by trained installers, was austere yet sensuous; it brought to mind not only the history of white monochrome paintings, from Malevich to Robert Ryman, but also Vermeer’s milkmaid. “If art is really good it can include everything,” Mr. Laib says in one of the catalog’s many koanlike statements.

That’s food for thought. Still, it’s probably best to think of “Grain of Emptiness” as an unorthodox sampling of Buddhism in recent art — one that supplements (but doesn’t replace) well-known works by John Cage, Yves Klein, Agnes Martin, Brice Marden, Bruce Nauman and many, many others.