Christchurch, New Zealand -- The power of prayer was felt in Christchurch today as thousands of people turned out for a service with the Dalai Lama. 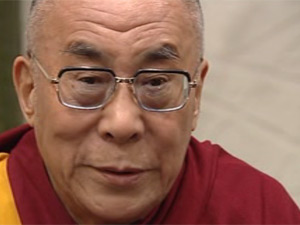 The Tibetan Buddhist leader came to the broken city out of compassion for the people of the quake-stricken city.

The Dalai Lama requested private meetings with people who lost loved ones in the February earthquake and at the start of the prayer meeting spoke briefly to each of the bereaved families.

He also spent time with injured people and emergency staff at Christchurch Hospital.

The only survivor of the Number 3 bus said it was a "never in a lifetime" occasion.

"He was wonderful - lovely, quite warm," Ann Bower said.

And Nick Walls, a victim of the PGC building collapse, also said it was an amazing experience to meet him, describing the Dalai Lama as "very kind and comforting".

Jaime Gilbert died in the quake and his loved ones said they felt honoured by the Dalai Lama's invitation. Jaime's partner Natalie O'Brien said it was an honour to be there.

"He's a very wise man, he's got a lot to teach us all," she said.
Advertisement

Families of the quake victims were given a special place to sit up the front at the service and they were joined by thousands of others, who were united in speaking of the Dalai Lama's inspiration and peace.

Emma Woods, the mother of four-year-old Nayan who was struck and killed last year by an out of control car, also attended.

The 75-year-old Tibetan spiritual leader requested the visit ahead of a 10-day tour of Australia.

He has visited Christchurch twice before, in 1992 and 1996, and said he has fond memories and a special warmth for the city. On both his previous visits he spoke at the now ruined Christchurch Cathedral.