Bay of Plenty, New Zealand -- It has been almost 30 years since Geshe Jamyang Sherab was last home. 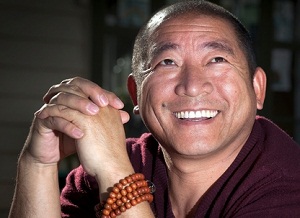 He was 17 when he walked out of Tibet and over the Himalayas to escape China's hold on the country.

Losing his parents when a young boy, he started studying at a local monastery at the age of 14 before it came too dangerous to continue his learning path to be a Buddhist monk.

In 1986, restrictions tightened on how many could study Buddhist philosophy so he and a friend decided they would leave with nothing more than a small knapsack on their backs.

Leaving Thargyey Monastery in East Tibet, they walked during the night to avoid road blocks and Chinese soldiers. Making their way to Lhasa, which took 11 days, they then walked for the next month over the Tibetan Himalayas to Nepal.

With only a small store of tsapa, dried barley and rice ground into flour, they would eat when they found a stream to mix the powder into a dough.

"I had to escape, I had no passport or documents," he said.

"We couldn't go on the road because of the army and military, I was sneaky, would walk in the night times or through the bush."

Mr Sherab said it was an uncertain and scary time not having many provisions or medical supplies.

Once in Kathmandu, Nepal, he found a job with a Tibetan family in their carpentry store where he worked for the next month saving. He then caught a bus to New Delhi, in India, and then on to Sera Monastery in Bangalore, in South India.

Many of his friends had made the same journey to continue their studies in Buddhism, a path he knew he wanted to continue.

After he had lived in the monastery for a month, the Dalai Lama visited, one of the greatest experiences of his life, he said.

He studied there for almost 20 years until he came to New Zealand in 1999.

In his first trip to the country he completed three sand mandalas, a Tibetan Buddhist tradition involving the creation and destruction of mandalas made from coloured sand, one each in Whangarei, Auckland and Dunedin. In 2001, he journeyed back to New Zealand and made 15 mandalas all over New Zealand, over one-and-a-half years. Each mandala took two weeks to create.

He moved here because it was his favourite place in New Zealand.

Mr Sherab's sister is still in Tibet and he has not seen her or her family, including three children and grandchildren, since he left in 1986. He would like to visit his homeland again, which reminds him of the mountainous South Island but has not set a date, for fears of trouble with the Chinese Government.

Classes will be one-and-a-half hours.

Mr Sherab said many people had been interested in different aspects of Buddhism and he wanted to be there to teach people about it.

The sessions would look at what Buddhism was, the four noble truths of Buddhism, meditation and prayer. The next term of classes starts July 22, 7pm, at the Historic Village.