Botany, New Zealand -- SEVEN years of labour will come to fruition with the grand opening of Botany’s Fo Guang Shan Temple next month – and Buddhist leaders hope it will be used by people of other religions as well. 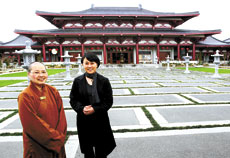 The temple was unofficially opened to the public last year, but will host Buddhist Master Hsing Yun in October.

The 82-year-old founded the worldwide Fo Guang Shan monastic order and will travel from Taiwan to open the Botany temple on October 2.

“It’s a special occasion. We’re counting down the days,” says grand opening chief executive May Wang. “We are so pleased to see this day come.”

Ms Wang says the temple has come a long way since its ground-breaking ceremony in 1999.

“With the traditional architectural design it does make it quite complicated to complete,” says Ms Wang. “There are a lot of devotees who contributed to this. We’ve had more support than obstacles.”

Local leader Reverend Miao Yu hopes the temple will continue to be a place of peace and solace for locals.

“We are welcoming everyone to come in here for guidance,” says Rev Yu.

“Buddhism is very open. We are friendly. We respect other religions as well. Some of our members are Catholic and Christian.”

“He really does what he’s saying. He’s very compassionate. He’s very tolerant – a good model of a Buddha.

It’s enjoyed positive feedback from the community, she adds.

“We respect the local people. They are very happy that they have the opportunity to come in and see what the temple is like.”