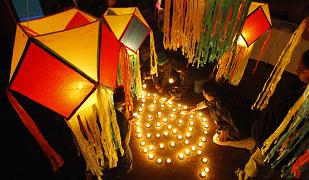 << Tiran Mendis, 28, from New Plymouth lights candles under lanterns at the festival of Vesack held at Lynmouth Park on Sunday.

Around 30 families met last night in Lynmouth Park to celebrate Vesak, the biggest event on the Buddhist calendar, marked by a lantern festival held each year on the first full moon in May.

For Buddhists, Vesak is the date when Buddha was born, reached enlightenment and died.

In Sri Lanka, lanterns are hung throughout the cities for a week to celebrate the holiday, but in New Plymouth, the lanterns were only hung up last night.

Unfortunately the lights went off in the middle of processions and an electrician had to be called, but it only meant the lanterns looked more effective.

New Plymouth resident Rajib Sadikeen said for a long time, he and other Sri Lankans who had spent many years in New Plymouth had not bothered to get together for Vesak.

"This is all inspired by the new families. Since they came last year, they have started all these kinds of things," he said.

As only a few places in New Zealand, such as Auckland, had Buddhist temples, it was up to the individuals to practise the philosophy themselves, Mr Sadikeen said.

The lanterns were made at home by each of the families, and lit up with tea light candles before the group listened to a sermon and ate a traditional dinner together.

Most of the new families have been brought here by work with engineering firms.

Before coming to New Zealand many lived and worked together in Iraq.