YANGON, Myanmar -- Amid the towering golden spires of Myanmar’s grandest Buddhist shrine there was talk of politics and hope for the future as thousands came Wednesday for the return of an annual festival that was banned for more than 20 years by the former military regime. 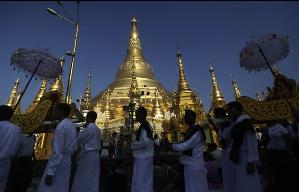 << Myanmar’s women take part in the 2,600th anniversary celebrations of Shwedagon Pagoda in Yangon, Myanmar, Wednesday, Feb. 22, 2012. Gongs chimed as thousands of people in ceremonial costumes walked barefoot Wednesday through the marble walkways of Myanmar’s most sacred Buddhist shrine in an annual festival that was banned for more than 20 years under the former military government.

Gongs chimed at Shwedagon Pagoda as the diamond-studded monument marked what is being billed as the 2,600-year anniversary of the temple, which according to legend houses eight strands of Buddha’s hair.

“The previous regime, they wanted people to be repressed, suppressed, quiet and stable,” said Pyinya Wuntha, a saffron-robed monk who not long ago might have been jailed for saying such things. “Now the government has changed and the system has changed.”

Fear that was so pervasive among the people of Myanmar is gradually giving way to greater confidence. Many people spoke candidly about the new government, without lowering their voices. Under the junta, it was taboo to discuss politics with foreigners and gatherings of more than five people were liable to a ban, due to the generals’ fears of an uprising.

It was against the backdrop of the Shwedagon’s golden dome that Suu Kyi electrified a crowd of half a million people in 1988 with a speech that launched her career as opposition leader and Myanmar’s icon of democracy.

For the festival, Shwedagon’s well-maintained grounds were spruced up with a half million orchids, dahlias and other flowers, organizers said.

The event opened with a morning procession of thousands of people in ceremonial costume walking barefoot along the temple’s marble halls. Gongs clanged from all corners of the compound as hundreds of monks chanted and the government’s Religious Affairs Minister, Myint Maung, came to pray.

One frail older woman said she had read in newspapers that the festival was making a comeback, but she didn’t believe it. So she traveled two hours by bus from her hometown of Oakkan, north of Yangon, to see it firsthand.

“It’s a shame and a sad thing that the government in a Buddhist country took this significant festival away from us for so long,” said Myint Kyi, whose husband held her upright for support.