Myanmar is reminded of its ethnic realities

Arakan, Myanmar -- A week ago, a Buddhist woman was raped, allegedly by a Muslim man in the Rakhine province (once known as Arakan) in Myanmar, once known as Burma. Incensed Buddhists stopped a bus which had many Rohingyas, who are Muslim, and killed at least ten, injuring others. 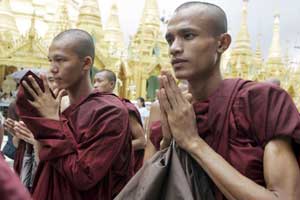 The death toll in the unrest since has risen to 21. Myanmar is sending troops to the region. Rohingyas are fleeing their villages for Bangladesh, which has rushed its own troops to the border. Yesterday, the Bangladeshi border authorities sent back three boats full of civilian Rohingyas fleeing conflict.

The stream of good news coming from Myanmar had to stumble at some point, and this is perhaps the time, where Myanmar’s horrific past and tragic presence have cast a shadow on its future. That this week Aung San Suu Kyi will receive her Nobel Prize 23 years late combines the ironies of the country impeccably.

This reality check doesn’t come from some generals expressing unhappiness with the effortless re-emergence of Aung San Suu Kyi in public life, but it reveals a far older problem, of how the country treats its minorities.

As an ethnic pot, heterogenous is a mild word to describe Myanmar. While Burmans (or Bamars, as they are known in the country) form the majority - and hence the country’s former name, Burma - there are other minorities dominant in specific geographic terrains, such as Kachins, Karens, Chins, Shans, Mons, and Karennis. Many of these groups have fought battles for decades against the army, with some demanding more autonomy and others demanding independence. The government has signed ceasefire agreements with all but one community, although some agreements are fragile. Aung San Suu Kyi has said reconciliation with the ethnic groups is important, and she draws on the Panglong Agreement her father signed, representing the Burmese Army, with three key groups before independence in 1948.

Notice the absence of Rohingya Muslims in the conversation. This group is a minority in Myanmar, and they “look” South Asian and not Southeast Asian. They follow a different faith - Islam - unlike the majority Buddhists. (Some ethnic groups which have fought the Burmese army are majority Christians). Since independence, relations between Rohingyas and the Buddhists have been poor, and in the 1980s the government actively pushed them out, with most of them becoming de facto refugees in Bangladesh. Myanmar denies them citizenship rights and places many restrictions on their personal lives. Over the years, Bangladeshi governments have negotiated with Myanmar and repatriated some Rohingyas. Officially, there are fewer than 30,000 Rohingyas in Bangladesh, but there are claims that the real figure is ten times larger.

The unrest has brought out horrendous atavistic emotions. When Irrawady, the independent magazine based in Bangkok that opposes the generals and is cautious about the current reforms, reported the riots, its message board began looking like the worst of the no-holds-barred comments against the Rohingyas. They’re not Myanmar citizens, said one; other epithets and comments were more pejorative. (Myanmar citizens who object to give citizenship to Rohingyas apparently don’t seem to mind Chinese nationals acquiring citizenship in their country. China has invested heavily in Myanmar, creating tens of thousands of jobs - for Chinese migrants in Myanmar. But let that pass.

It is in that context that Bangladesh’s decision to close its border, and turning back Rohingyas leaving Myanmar for Bangladesh, is cruel and unjustified, and possibly a violation of international obligations to refugees. Meghna Guha Thakurta, a peace and reconciliation expert in Dhaka told me at the time of the April by-elections which, Aung San Suu Kyi’s party, the National League for Democracy won, that dealing with the Rohingya issue will be a real challenge for her. That challenge has arrived sooner than she may have wanted.

And yet, Bangladesh’s response flies in the face of its own history. In 1971, nearly 10 million people from the land that became Bangladesh fled for India, as Pakistani troops unleashed brutality on an unprecedented scale, to suppress Bangladeshi nationalism. At that time, India opened its doors. Bangladesh has sought humane treatment of Bangladeshis who continue to cross the Indian border illegally since then. Surely its leaders know, then, that they should open their border with Myanmar, so that those who have well-grounded fears of persecution can feel safe.

More than that, Myanmar’s president Thein Sein has to use his imagination and political capital with the same skill with which he is guiding the country’s return to democracy. Aung San Suu Kyi can help, but the government has to reassure the victims first.